Central Asian Countries’ Power Systems Are Now Isolated, But Not Everyone Is Happy!* 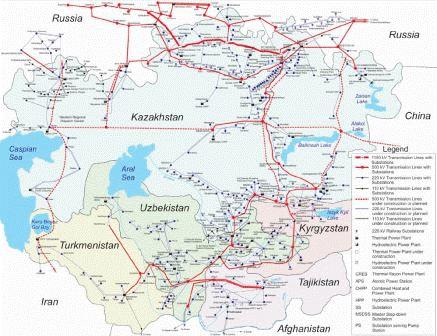 The Central Asian Power System (CAPS) was established in the 1960s and 1970s. The system consisted of mainly 30 percent hydro power plants (HPP) of Central Asian upstream and 70 percent thermal power plants (TPP) of downstream countries.[i] The Integrated Dispatch Center Energia, based in Tashkent, controlled the electric power supply operations of the CAPS. Even though the CAPS was part of the Unified Energy System of the USSR, physically it was isolated from the Russian electricity grids. Nonetheless, Energia was still subordinate to the Central Dispatch Center based in Moscow and financed by the Ministry of Energy and Electrification of the former Soviet Union. After the collapse of the Soviet Union, the CAPS started operating on its own.

Also called the Central Asian “electricity ring,” CAPS connected all 83 power units (including 29 thermal and 48 hydro) of the southern part of Kazakhstan, Kyrgyzstan, Tajikistan, Turkmenistan, and Uzbekistan and was managed by Energia. Fifty-one percent of total CAPS electricity was generated in Uzbekistan, 13.8 percent in Kyrgyzstan, 9.1 percent in Kazakhstan, 15 percent in Tajikistan, and 10 percent in Turkmenistan.[ii] Having gained independence Central Asian governments started pursuing what they call “independent,” which over time turned into “isolationist” energy policies. As a result, some of the countries are now relatively better off, while others failed to achieve energy independence.

The power sector development of Turkmenistan is the most successful example of the independent power systems established after the break down of the CAPS. A countrywide electric power system of Turkmenistan was established with the interconnection of Ashgabat, Mary, and Charjou electric power grids in 1970. Ten years later, the formation of the centralized Turkmen electric power system was completed. Electricity generation on Mary TPP, with a capacity of 1685 MW, started operating in 1987. In 2011, it produced 9022 million kWh, accounting for 49.4 percent of total electricity production in the country. Currently, there are nine state electric power plants with a capacity of 3984.2 MW to produce electricity in Turkmenistan. Having withdrawn from the CAPS in 2003, Turkmenistan is now increasing its electricity production capacity by building new TPPs.[iii] Abundance of natural gas to run gas-fired TPPs and introduction of new generation capacities not only ensured self-sufficiency but also turned the country into exporter of electricity to Iran and Afghanistan.

Kazakhstan is another successful example compared to its Central Asian neighbors. Kazakhstan’s electric power grids were designed to operate in parallel with both Russian and the unified Central Asian electric power systems. The power system of the country is divided into three zones: northern zone (Akmola, Aktube, Kostanay, Pavlodar, North-Kazakhstan, East-Kazakhstan, Karaganda); southern zone (Almaty, Zhambyl, Kyzylorda, south–Kazakhstan); and western zone (Atyrau, Mangystau, and West–Kazakhstan regions). The southern zone is connected to the electric power grids of not entirely reliable Uzbekistan and Kyrgyzstan. Northern regions are supplied with electricity from cheap coal-fired TPPs such as Ekisbastus. Since the northern zone produces 72.7 percent of the total electricity in the country[iv] and there is an excess of power generation the north–south 500 kV transmission line was built in 1998 to cover the peak electricity needs of the southern regions of Kazakhstan and to secure itself from unilateral supply cuts from the electric power grids of Uzbekistan. On top of that, to increase power production capacity of the South and South-Eastern regions of the country the government is also building new power generation facilities such as Zhambyl and Balkhash power plants, thus decreasing Kazakhstan’s still existing insignificant dependence on the power supplies from the neighboring countries.

The breakdown of the CAPS, however, hit Tajikistan the most. Tajikistan’s domestic energy production almost completely relies on hydro-power sector development. But, due to seasonal variation in hydroelectricity production and limited fossil fuel reserves Tajikistan has never been able to meet its electricity needs all year round and imported power from Uzbekistan in the winter. Uzbekistan’s withdrawal from the CAPS and the cut off thermal electricity supply left Tajikistan in complete isolation and severely affected the level of its energy security, especially in winter months. To supply electricity to its northern regions, the government has promoted the construction of the 500 kV South–North and Lolazor–Khatlon 220 kV electricity transmission lines.[v] However, the lines cannot solve the problem of winter electricity deficiency; therefore, the government of Tajikistan has prioritized the construction of the Rogun dam and HPP with the capacity to double the current electricity production volume, which would also allow hydroelectricity generation during the winter period. Yet, Uzbek authorities perceive this project as a threat to the water balance in the region and thus strongly oppose any progress in this direction. Because Tajik authorities do not have sufficient funds to complete the construction and international organizations (Asian Development Bank or World Bank) do not support HPP projects on transboundary rivers without the consent of all countries along the stream, the Rogun remains the goal not yet achieved.

Similarly to the case of Tajikistan, when the power supply within the CAPS was compromised, in order to overcome the consequences of uneven distribution of electricity, the Kyrgyz government has recently put into force the Datka electric power station and completed the Datka–Kemin electric power transmission line connecting the southern and northern parts of the country.[vi] However, according to Nikolai Kravcov, member of the Monitoring Council under the Ministry of Energy, Kyrgyzstan will continue to experience electricity supply shortages due to lack of production. And even the Datka–Kemin electric power transmission line will not save Kyrgyzstan from an energy crisis. This transmission line solves the problem of transporting electricity, but does not add electric power-production capacity.[vii] Construction of the Upper Naryn HPPs and projected to be the largest Kambarata-1 HPP has been recently suspended due to Russian companies’ incapability to allocate the funding.

Since the CAPS was designed irrespective of national borders, due to Uzbekistan’s central geographical location, it was economically cost-efficient to establish the network of transmission lines connecting all other countries through the territory of Uzbekistan. Uzbekistan was not only the largest producer of electricity within the CAPS, but also enjoyed the most sophisticated power transmission infrastructure connecting all neighboring countries. Installed capacity of all electric power plants in Uzbekistan exceeds 12 GW, with TPPs contributing almost 11 GW, which equals 50 percent of all generating capacities of the CAPS. TPPs in Uzbekistan are designed to operate in the base-load mode. The peak electric power demand was met from the import of hydroelectricity from the neighboring upstream countries. When Uzbekistan left the CAPS it had to cover its peak demand supplies by increasing electricity production in the TPPs. Taking into account the fact that there has been no gas production boom in the country to run gas-fired TPPs, Uzbekistan is already experiencing electricity shortages and the problem of power insufficiency is escalating.

To sum up, the analysis shows that there are limited opportunities for both Tajikistan and Kyrgyzstan to ensure its energy security on its own in the short- to medium-term. Uzbekistan, withdrawal of which from the CAPS collapsed the whole system, was not expecting that it would lead to serious power supply shortages domestically. While Turkmenistan and Kazakhstan are better off than their other counterparts, intra-Central Asian electricity trade would still be beneficial for all states. In this regard, perhaps the most rational choice for all countries would be to restore the CAPS and re-engage in power trading dynamics on a larger scale.

[i] Kh. A. Shamsiev, “Coordination and Dispatch Center ‘Energy’ Issues of Regional Cooperation within the Central Asia Integrated Power System,” 2009.