On May 14, 2019, during the governmental meeting, Kazakhstan’s Cabinet of Ministers and regional governors presented their reports to Prime Minister Askar Mamin summarizing the results of socio-economic development during the first quarter of 2019 (government.kz). The Prime Minister noted that in general, the country’s economy maintained a growing pattern. As it was reported by the Minister of the National Economy Ruslan Dalenov, the GDP growth during January-April reached 4% of growth compared to the same period of 2018. He also mentioned that the industrial output increased by 2.9% during January-April and noted that the growth is due to the leading pace in manufacturing, which had shown a 3.5% growth. During the first three months, this indicator was at 1.6% and was accelerated significantly by the growth in oil refining, mechanical engineering, beverage production, as well as pharmaceuticals. During the previous governmental meeting, the ministers also gave a positive evaluation to the performance of the economy and of the manufacturing industry, in particular, pointing out the 4.1% of real growth investments by 1.1 trillion tenge ($2.9 billion) (kazpravda.kz). 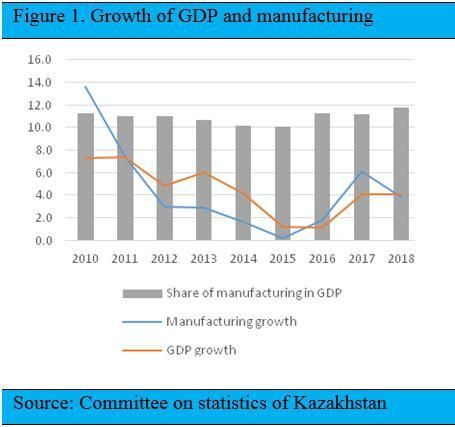 Manufacturing has one of the highest shares of small firms, which is 84.6% whereas, in the extractive sector, this share is at 77.9%. In fact, if we derive the average size of firms in the entire economy of Kazakhstan by dividing the number of employees by the number of firms, it turns out that by the end of 2018 the average sized firm had 30.7 employees. Manufacturing had slightly larger firms with 39.1 employees per firm. On the other hand, the extractive industry on average consisted of medium-sized firms with an average size of 104.0 employees per firm.

Hence, the manufacturing sector, which is the top priority sector of the economy, is basically an issue of privately owned small enterprises. In other words, addressing the problems of small private firms includes addressing the problems of manufacturing firms. One of the alternative ways of looking at the current state of firms and making projections for the near future is to look at some key financial indicators of the firms. One of such indicators is the number of loans issued by banks to firms and it is important whether the borrowings are short term or long term. It is a commonly known regularity that when firms have positive economic expectations, good financial conditions that will allow them to handle the loans they tend to take long-term borrowing from banks. Figure 2 below shows the relative shares of long-term vs short-term loans over the last four years taken by small-sized firms with less than 100 permanent employees in Kazakhstan. As we can see, there has been a small relative growth of long-term loans by small firms from 38.4% in 2015 to 45.5% in 2018. Hence, small firms are slightly better off financially and have a bit more projects for the distant future now than in 2015. Figure 3 shows the percentage share of short-term vs long-term loans by firms in the entire industrial sector, including manufacturing, extractives, utilities, etc. It turns out that the industrial sector tends to take more short-term loans than other industries. Some two-thirds of the loans issued to small firms in the industrial sector are short-term loans but the share of long-term loans have increased almost twice since 2015. Figure 4, on the other hand, shows the shares of short-term and long-term loans given by banks to small firms in manufacturing industries. As we can see, only one-fifth of the loans to small manufacturers are long-term loans and there is no tendency for the share of long-term loans to rise over the last four year. Moreover, throughout the Figures 5-7, we can see that small manufacturers not only take less and less long-term loans but also take a lesser amount of bank loans of all types. 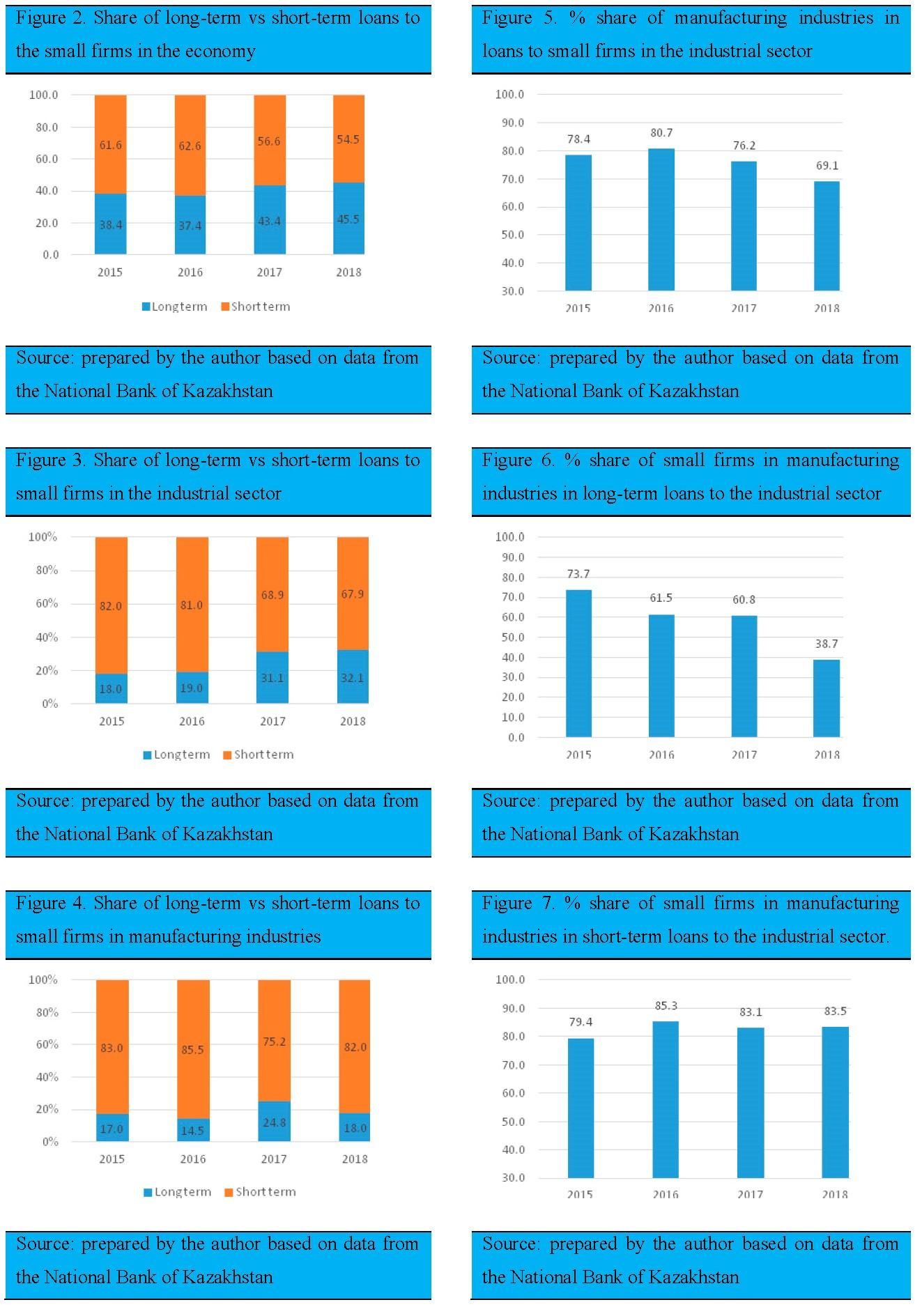 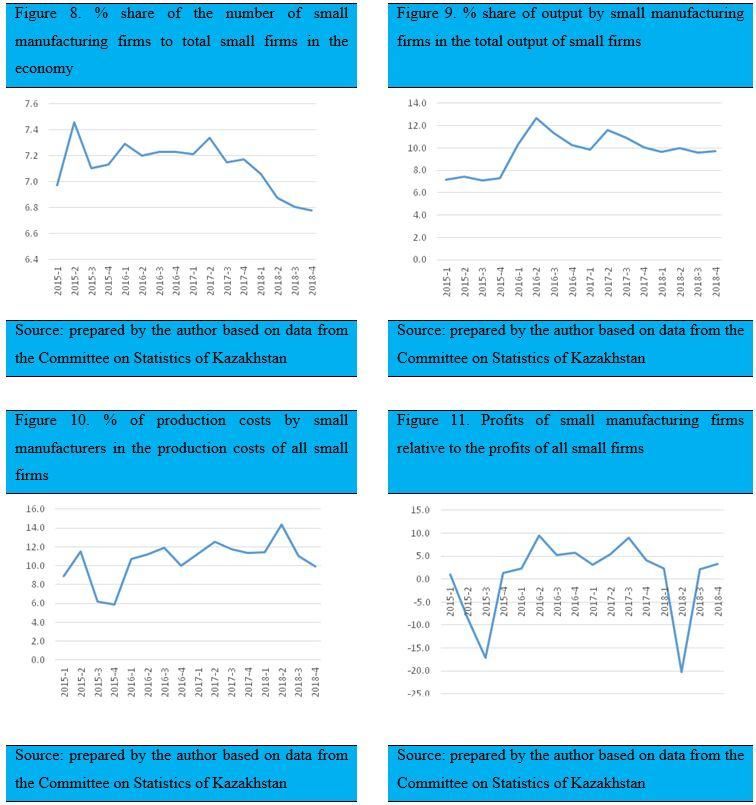 The findings from some of the key microeconomic data of small firms allow us to better understand the processes going on in the manufacturing industry of Kazakhstan, disregarding some key current indicators that are often used in official reports. The main advantage of looking at some microeconomic data is that it allows us to make certain projections for the near future of the industry. Thus, the microeconomics of the small manufacturing firms in relative terms to other industries is not positive enough for us to expect major breakthroughs in the next 2-3 year. Since 2015, there has been a very sluggish growth of the manufacturing sector with very moderate growth in terms of the number of firms, employees, and output. Most importantly, there is little and diminishing demand by small manufacturers on long-term loans and on loans in general from banks suggesting that the amount of projects for the near future by small firms is very limited. We observe that small firms in manufacturing are investing less and less in production, which will have a negative effect on the overall performance of the industry. Small manufacturing firms also tend to experience large volatility in terms of production costs and profits, which makes them much vulnerable relative to small firms in other industries. Hence, significant growth of the manufacturing sector in Kazakhstan during the short-term perspectives requires additional measures supporting small firms.

Kazpravda.kz (2019). The driver of industrialization should be engineering. Retrieved from https://www.kazpravda.kz/news/ekonomika/draiverom-industrializatsii-dolzhno-stat-mashinostroenie–mamin. Accessed on 10.05.2019.

National Bank of Kazakhstan (2019). Credits issued by banks, by type of economic activity (according to extended classification) and interest rates on them. Retrieved from https://nationalbank.kz/?docid=3458&switch=russian. Accessed on 14.05.2019.