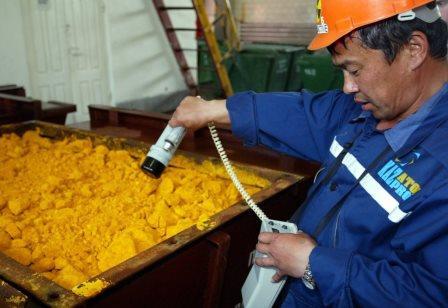 In the Soviet period, Kazakhstan’s uranium industry played an important role as an integral part of the USSR’s nuclear military-industrial complex. When the Soviet Union collapsed, in addition to the nuclear-weapon systems and facilities, the newly independent state inherited a developed civilian uranium mining and processing infrastructure (Nuclear Threat Initiative, 2015). However, the disruption of economic ties after December 1991 led to the weakening of cooperation between the nuclear-fuel-cycle entities of Kazakhstan, Russia and other post-Soviet states, and the country’s uranium sector underwent a crisis, in need of significant investment and upgrades. It was not until 1997 when the state-owned nuclear company Kazatomprom was established that the uranium industry started to recover. This important move coincided with the renewed interest in nuclear energy in the world allowing the government of Kazakhstan to successfully implement the strategy for developing its national nuclear industry, which dramatically expanded the domestic natural uranium production.

In 2009, Kazakhstan became the world’s leading uranium producer, with almost 28% of the global uranium market, leaving Canada and Australia behind. By 2016, Kazakhstan’s share increased to 39%, with the uranium production rising from 14,020 tons in 2009 to 24,575 tons in 2016. Since uranium is mined by five enterprises owned by Kazatomprom and 12 joint ventures with foreign companies, Kazatomprom itself accounts for 21%, or 12,986 tons, of the world production (World Nuclear Association, 2017). It is worth mentioning that Kazakhstan possesses 12% of the world’s recoverable uranium resources, and total reserves are estimated at approximately 1.4 million tons (Zhandybayev, 2017). Moreover, due to geological peculiarities of the Kazakh uranium deposits and the use of a low capital-cost method of in-situ leaching, extracting uranium in Kazakhstan is comparatively cheaper than in other parts of the world. The country’s uranium is exported to China, the United States, South Korea, the European Union, India, Ukraine, and Canada (Kazatomprom, 2017).

Along with being one of the key sources for supplying the global nuclear power industry with uranium, Kazakhstan also seeks to produce domestically higher-end, value-added nuclear products, such as fabricated fuel assemblies, rather than just natural uranium. Kazatomprom’s main uranium processing subsidiary, the Ulba Metallurgical Plant in Oskemen, is one of the leading manufacturers of uranium dioxide fuel pellets for nuclear power plants (NPP), but Kazakhstan has indicated its interest in running more advanced stages of the nuclear fuel cycle, such as conversion and/or enrichment, on its territory. However, the international uranium stakeholders have not been interested in supporting Astana’s aspiration to become a full-fledged player of the world market of high-added-value uranium products. Besides, the March 2011 accident at the Japanese Fukushima NPP has dealt a serious blow to Kazakhstan’s plans to enter new product markets, making the outlook for nuclear energy growth murky. As a result, Kazatomprom’s cooperative arrangements with France’s Areva and Canada’s Cameco, the world’s leading companies in this sector, to build uranium hexafluoride conversion and fuel assembly production facilities at the Ulba Plant have not been implemented. Similarly, plans to construct NPPs in Kazakhstan in cooperation with Russia and, possibly, Japan have been put on hold. Due to Kazakhstan’s nuclear nonproliferation obligations, it is politically unfeasible to create uranium enrichment capacity in the country, but Kazatomprom has managed to gain access to enrichment through forming a joint venture with the Russian TVEL at the Urals Electrochemical Combine at Novouralsk and acquiring a 10% share of the International Uranium Enrichment Center at Angarsk (World Nuclear Association, 2017).

In 2007, to prove the seriousness of its ambitions, Kazatomprom acquired a 10% share of Westinghouse, the U.S.-based NPP building unit of Japan’s Toshiba Corporation, for $540 million. However, after the May 2009 change of Kazatomprom’s leadership, nuclear cooperation with Japan has decreased giving way to more active collaboration with Russia. More importantly, as the global nuclear power boom has subsided worldwide, Westinghouse faced massive cost overruns in its nuclear power plant construction projects and filed for bankruptcy in March 2017. Fortunately, Kazatomprom will not sustain considerable financial losses since at the time of the purchase it had negotiated a put option that allows selling its entire minority stake in Westinghouse back to Toshiba at a fixed price proportionate to the initial investment. Indeed, in early October 2017, Toshiba announced that it would buy back Kazatomprom’s stake in Westinghouse for 59 billion yen ($522 million), taking full ownership of the bankrupt company (Reuters, 2017).

The market oversupply and resulting price slump in 2016 forced Kazatomprom to declare in January 2017 that it would reduce uranium production this year by more than 2,000 tons, or about 10% of its output, an amount equivalent to 3% of global production (World Nuclear News, 2017). While this announcement led to a short-term increase in the uranium spot prices, its influence has not been enduring, and the prices remain under pressure. Nevertheless, Kazakhstan continues to implement its long-term diversification strategy for the national uranium industry. In December 2016, Kazatomprom and China General Nuclear Power Group launched a joint venture at the Ulba Plant that is expected to produce ready-to-use nuclear fuel assemblies for Chinese NPPs starting in 2020. According to the plan, at the first stage the joint venture will produce 200 tons of fuel assemblies a year using fuel fabrication technology and production equipment supplied by Areva, while enriched uranium will be procured either from China or Russia. The Ulba Plant owns 51% of the joint venture called Ulba-FA, and the Chinese side controls the remaining 49% (Kazatomprom, 2016).

To maintain its global competitiveness, since 2015, Kazatomprom has been implementing the large-scale transformation program that provides for improvements in the company’s production process, marketing policy, diversification strategy, corporate governance, management quality and transparency practices. As part of the program, the company has introduced the enterprise resource planning system to streamline its core business and industrial processes, including automation and digitalization of operations. In addition, Kazatomprom has initiated the program for disposing of its noncore assets and reducing capital expenditures. As of early 2015, the company had 82 subsidiaries and affiliates engaged in various kinds of business activity, many of which were loss making, and by the end of 2018 it plans to reduce the number of affiliated entities to 42, all involved in uranium production (Alibekova, 2016; Akhmetbekov, 2017). The companies that are subject to asset divestiture include Astana Solar (photovoltaic modules), Kazakhstan Solar Silicon (multicrystalline silicon wafers and photovoltaic cells), MC KazSilicon (metallurgical silicon), and Caustic (chemical products). The aim of these measures is to improve economic performance and efficiency of the company that employs more than 26,000 people. In addition, the transformation program is intended to prepare the company for initial public offerings, and it is expected that up to 25% of Kazatomprom’s shares will be sold to outside investors by 2019 (Kazatomprom, 2017).

It is clear that Kazakhstan sets ambitious goals for using its available peaceful atom opportunities to create a new high-tech branch of the national economy and turn into a key player in the world nuclear fuel market, as well as strengthen its internal scientific and technological potential. That is why Astana aims to strengthen cooperation in this area with the states that have advanced nuclear cycle technologies and practical experience of their application. At the same time, in the process of expanding partnerships in the nuclear field, it is necessary to take into account the country’s long-term interests and avoid perpetuating the status of a mere supplier of raw materials to the international atomic energy industry. The government of Kazakhstan must develop nuclear cooperation with its international counterparts based on the principles of pragmatism and mutual benefit, ensuring the country’s access to sophisticated technology and know-how.

Kazatomprom. (2016). The construction of nuclear fuel fabrication plant has started in Kazakhstan. Retrieved from http://www.kazatomprom.kz/en/news/construction-nuclear-fuel-fabrication-…. Accessed on October 4, 2017.

*Published in the November 2017 No. 23 issue of the “Asya Avrupa: Haber-Yorum” journal.