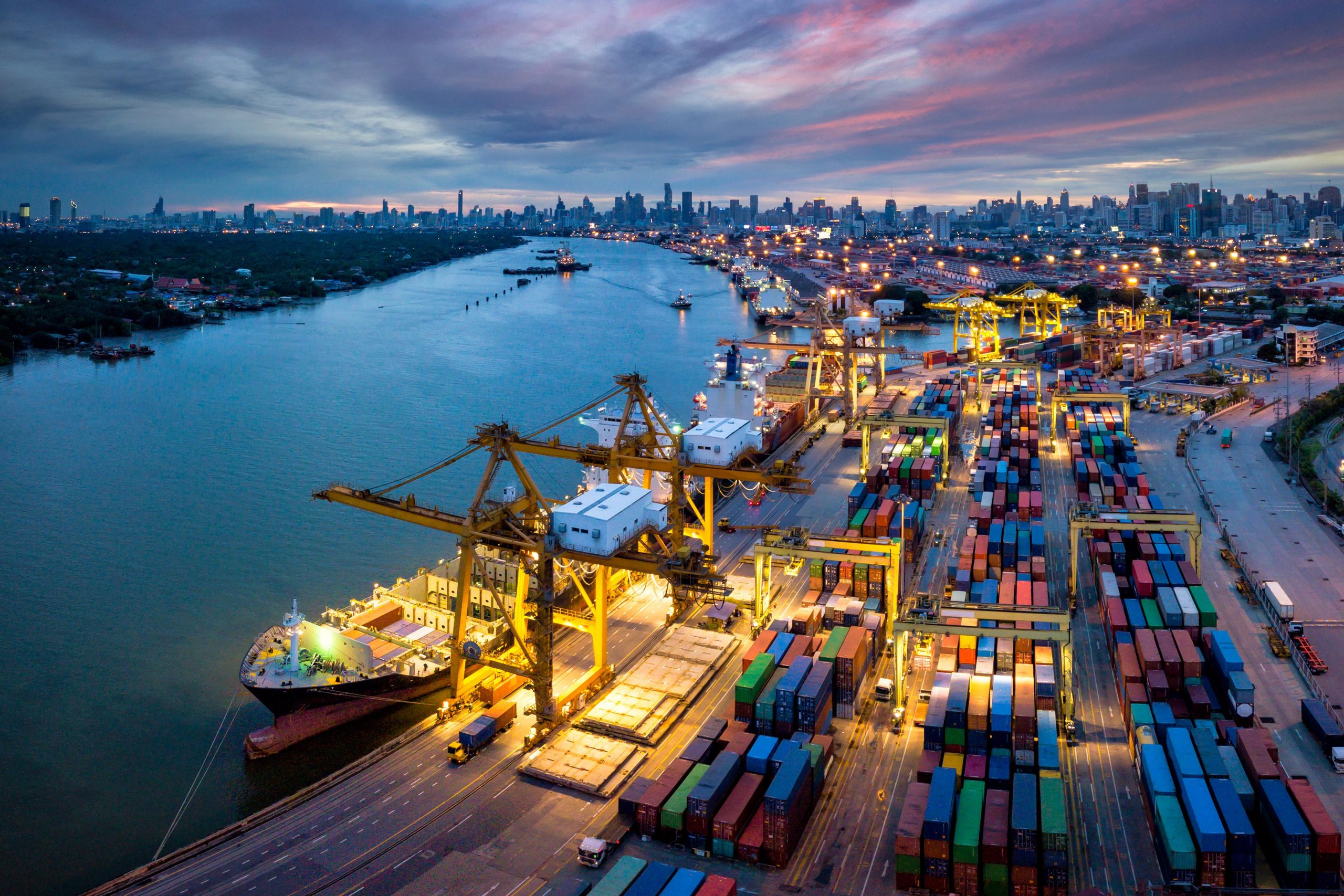 Many developing countries in the Eurasian region are in search of economic growth drivers. The previous growth models mainly based on fuel exports can no longer guarantee sustainable development due to ongoing structural transformations in the global economy. Renewable energy investments demonstrate high growth rates. Gradual substitution of traditional energy by renewables puts these countries at additional risk. Therefore, export diversification is one of the priority policies, which, in turn, needs high-quality infrastructure. Thus, this commentary aims to review the macroeconomic effects of infrastructure development.

The macroeconomic effects of infrastructural investment and different modes of transportation attract a wide interest of researchers. Many studies find and show that infrastructural development positively affects international trade and economic growth. Hummels (2007) explains that the tremendous increase in global trade since 1950 was due to technological change in air shipping and the declining cost of rapid transportation. According to Ismail and Mahyideen (2015), improvement in all transport infrastructure sectors and development of soft infrastructure elements such as good business and regulatory environment, transparency, and customs management can lead to higher trade in agricultural and manufacturing products. Olarreaga (2016) shows that national and international infrastructures have a positive impact on trade, but effects are country-specific and depend on initial conditions including the quality of both soft and hard infrastructure. Donaldson (2018) indicates that railroads reduce trade costs, price gaps, and increase interregional and international trade volumes and real income levels. Hummels and Schaur (2013), considering time as a trade barrier, argue that trade facilitation measures generate benefits measured in days saved. Based on the model of substitution between the use of air and ocean cargo, the authors find that long transit delays significantly lower potential goods exports of a country. According to the findings of Cosar and Demir (2016), internal road infrastructure plays an important role for Turkey to access international markets. They calculate that the cost of an average shipment over a high-capacity expressway is about 70% lower than it is over single-lane roads.

The Eurasian region was also the focus of many studies. According to Shepherd and Wilson (2007), in Europe and Central Asia, better roads are associated with larger trade flows and their benefits may be greater than from trade liberalization. The authors find that road upgrades in the region can boost intra-regional trade by 50%. However, to achieve these promising results, countries of the region should coordinate road network upgrades. At the same time, unilateral actions of the countries can also be beneficial.

Many studies indicate infrastructural problems of the Eurasian region. The most important issues for the region are outdated infrastructure and an insufficient level of infrastructural investments. Figure 1 shows the Logistics Performance Indices of selected Eurasian countries. According to data, the majority of the countries made no progress in terms of infrastructure development. China ranks first in the list of selected countries. In 2018, it ranked 26th out of 160 countries, while in 2010 it positioned 27th out of 155 countries. Turkey’s 2018 position worsened compared to its 2010 indicator. In particular, its rank changed from 39th to 47th. Russia demonstrated insignificant progress reaching the 75th position in 2018. The infrastructural improvements of Iran were considerable. It ranked 64th in 2018, while its 2010 position was 103rd. Indicators of the remaining countries worsened and the majority of them lagged far behind the global leaders. 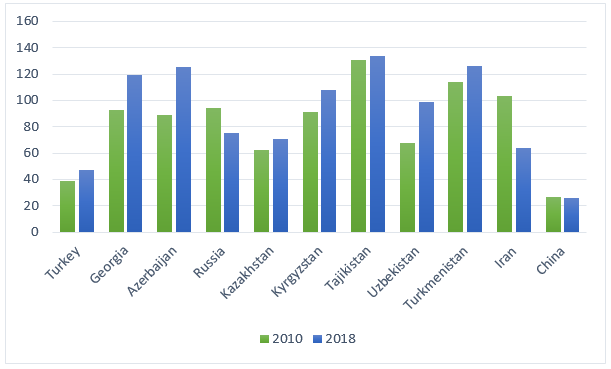 Source: The Author’s compilation based on the World Bank (2021) data.

Note: the latest available data for Azerbaijan is 2014.

Infrastructure investment gaps became an important problem for advanced economies such as the United States (US). For instance, the American Society of Civil Engineers gives US infrastructure a score of C-, classifying it as “poor” and “at-risk”. It is important to note that the US spends only 2.3% of GDP on infrastructure, while European countries spend 5% on average and China spends about 8%. Just to meet basic national needs by 2025, the US needs an additional $2 trillion. These investments will have significant positive effects as they will boost employment, increase aggregate demand, put upward pressure on wages, and increase productivity. Moreover, they can reduce income inequality and narrow racial and gender wage gaps [Escobari et al., 2021].

It is expected that the infrastructure investment gap in Central Asia will also widen. Available data for Kazakhstan demonstrates these tendencies (Figures 2-3). According to the forecasts, Kazakhstan’s infrastructure investment gap will reach $84 billion. A sector, which demonstrates the highest need for investment, is road transport. It is expected that the road transport infrastructure gap will amount to $79 billion by 2040. It is important to note that Kazakhstan remains the largest economy in Central Asia, which participates in many regional and international infrastructural projects. In terms of infrastructure development, the country cooperates with international financial institutions (IFIs) such as the World Bank and the Asian Development Bank. Moreover, it implements its own infrastructure development program Nurly Zhol (Bright Road). Despite that, forecasts show a significant infrastructure gap in the future. The situation in the remaining regional countries may be worse given their economic performance. This means that Central Asian countries should cooperate and coordinate their infrastructural policies to close the gap. Cooperation with the IFIs is essential. 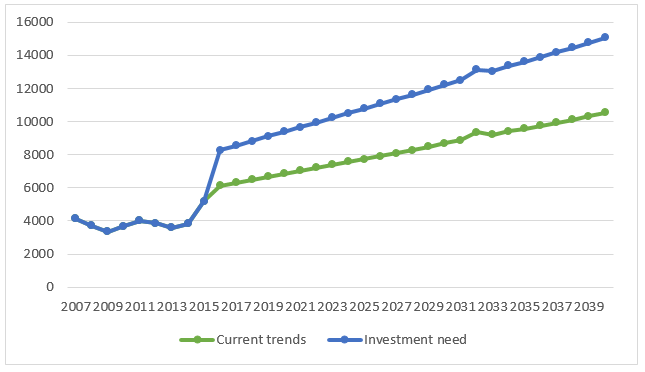 Source: The Author’s compilation based on data from the GIH (2021). 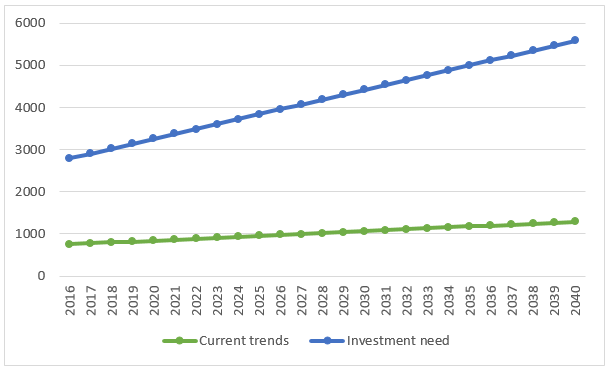 Source: The Author’s compilation based on data from the GIH (2021).

Low diversification of the majority of the Eurasian economies and weak institutions also restrict their ability to trade and reach higher economic growth rates. Peyrouse and Raballand (2015) argue that the most significant barriers to trade and regional transport infrastructure development include production patterns, corruption, and poor border management practices. They provide plenty of evidence on disruptive policies and show that there is no transport reliability and predictability in the region. For instance, countries of the Eurasian region can unilaterally raise transit fees and introduce highly disruptive border and customs control policy or even close the roads beneficial for regional trade due to political decisions [Grafe et al., 2008].

Thus, infrastructure development remains important and has significant positive macroeconomic effects. High-quality roads, railroads, ports, and other infrastructural facilities are essential for internal and international trade, economic growth, and job creation. The Eurasian countries need to significantly increase infrastructural investments to close the existing and future gaps. This will require not only country-specific efforts but also regional and multilateral cooperation.

Ismail, Normaz Wana, and Jamilah Mohd Mahyideen (2015). The Impact of Infrastructure on Trade and Economic Growth in Selected Economies in Asia. Asian Development Bank Institute. Retrieved from http://www.adb.org/publications/impact-infrastructure-trade-and-economic-growth-selected-economies-asia/. Accessed on 26.05.2021.