The Future of the Labor Market in Russia 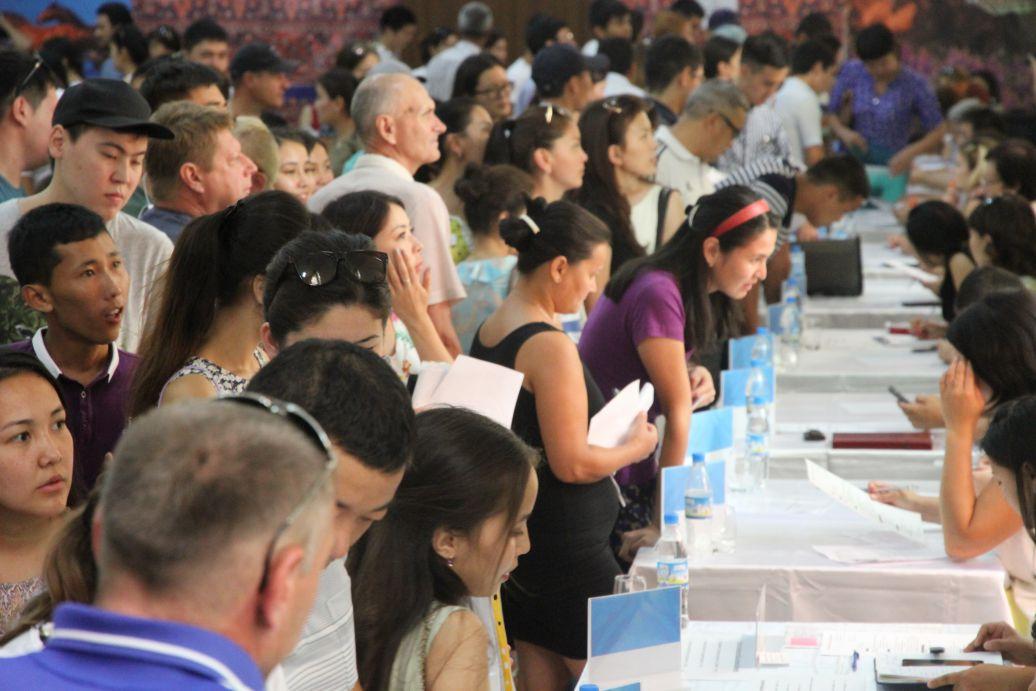 Depopulation, aging and shrinking number of the working-age population are some of the biggest challenges which Russian labor market face today. The year 1995 is an important year for demographic dynamics in Russia because after that year number of population continuously decreased and according to forecasts it will fall even further in the near future. The current problems could be solved by either natural or migration-based option. First, option refers to solve the issues of the labor market with increasing the natural growth of the population while the second solution advocates attracting a large number of migrants to Russia (Rosstat, 2016). However, total fertility rate of Russia is below sustainable growth rate indicating that Russian population will decline and consequently the number of working-age population will decrease Moreover, the current level of the migration flow is not large enough to compensate the losses in the number of population and working-age population (World Bank, 2016).

A historical review of population growth indicates that between 1965-1995 years the number of the population has continuously increased reaching its peak with 148.2 million in 1995. Starting from 1995 the situation has changed where a number of the population started to fall and never reached the 1995 level again. Therefore, 1995 represents a breakeven point for Russian demographic situation and a starting point of the depopulation problem. The last two decades falling trend escalated and Russian population has decreased 4.8 million people falling to 143.4 million in 2015 (UN, 2016).

Although there is a slight improvement in the number of population in recent few years, the future of Russian demographic situation does not look very bright. United Nations Population Division in their data has analyzed the future of the Russia’s population under three different scenario (low, medium and high). The low variant forecast indicates that Russian population will decrease almost 10 million by 2030 whereas this figure is for medium scenario 4.85 million and as for the most optimistic option number of population will not decrease in fact, it will slightly increase reaching to 143.7 million by 2030 (UN, 2016).

Comparing all three variations it could be said that most realistic prediction is the medium variant. Because based on the current demographic dynamics without a massive migration flow the number of population will decline. The important question here is that how much it will decline? On this point, prediction of low variant also seems quite distant from the reality, which we observed the last two decade where a number of the population between 1995-2015 years has fallen around 4.8 million. Therefore, by taking historical background into consideration the closest guess in terms of number is the medium variant that states that a number of population will decline around 4.8 million in the next 15 years (UN, 2016).

Russia alongside with the depopulation issue also struggles with the aging problem where the age-dependency ratio is continuously increasing and according to forecast, it will continue to increase. The dependency ratio indicates the share of dependents (who are below 15 and over 65 years old) to the total workforce (15 to 64 years old) (Investopedia, 2016). A higher dependency ratio is likely to put pressure on pension system and government expenditure on social benefits, which could lead to increase in taxes and raising the retirement age. Looking at the age dependency ratio of Russia the number of the dependent groups is reduced from 44.3% in 2000 to 38.8% in 2010. However, during 2010-2015 years the ratio increased by 4.4% and within the next 15 year, it is expected to increase 13.5% reaching 56.6% by 2030. On this point, a large part of this increase will occur in the next 10 years where the ratio will jump from 43.1% in 2015 to 50% in 2020 and to 55.3% in 2025 (World Bank, 2016). 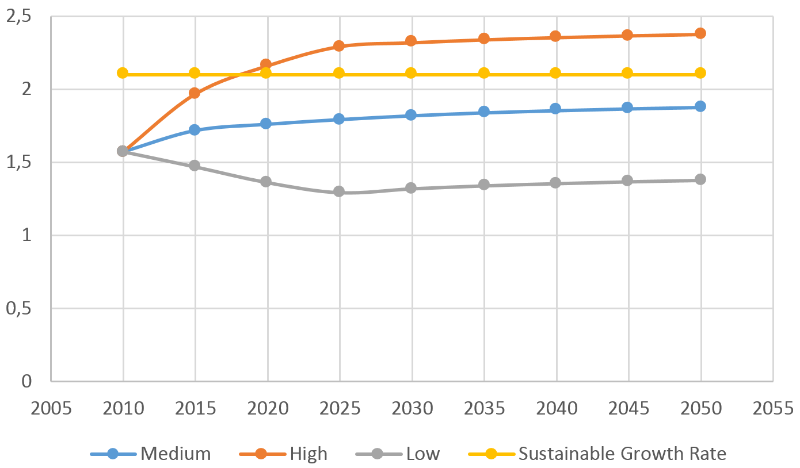 Total fertility rate (TFR) provides essential information regarding the dynamics of demographic changes and these changes in demography affects the number of population and the working-age population. In order for a country to maintain a stable sustainable population growth, TFR should not be less than 2.1. For instance, the world average is 2.5 TFR while this figure is for European Union 1.54 and for South Asia 2.55 TFR (World Bank, 2016). TFR rate of Russia has been gradually decreasing since the 1950s however during the 1987-1993 years the TFR rate fall sharply from 2.22 to 1.38 and manage only to surpass 1993 level after 2006. In the following 9 years, TFR significantly increases to 1.7 in 2015. However, this is not enough to maintain the current level of the population since the TFR is below the 2.1 average. Among three forecasts, only in case of high variant scenario, Russia could preserve its population growth while in the case of medium or low variant the number of population will decline (UN, 2016). 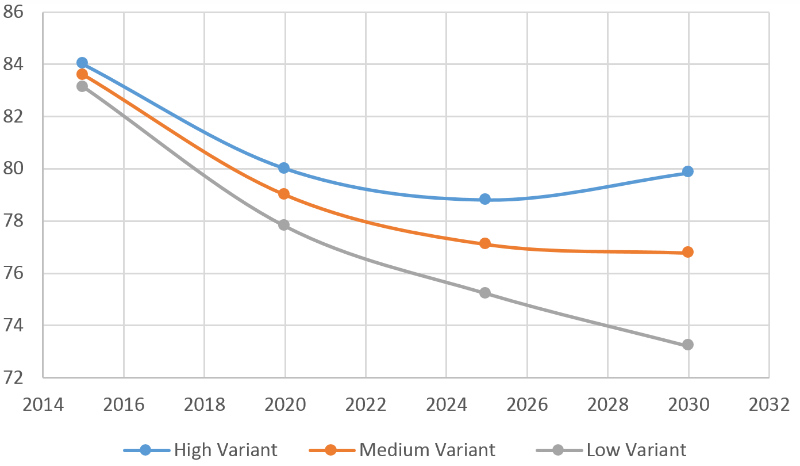 The falling trend in the number of working-age population in combination with aging creates serious challenges for the Russian labor market. Shrinking number of workers will increase the competition for labors and their salaries that will create additional problems for the businesses (Kucera, 2015). During 2011-2015 years, a number of the working-age population has decreased 3.6 million workers and forecasts indicate that it will get worse (ACRF, 2016). On this point, the major concern regarding the Russian labor market’s future is even in the ideal version of the forecast; working-age population will decline 4.1 million workers whereas this figure is for medium variant 6.8 million and for low variant almost 10 million by 2030 (Rosstat, 2010).

In all variants, the number of working-age population will fall significantly between 2015-2020 years and after 2020, the decrease in high and medium variant will slow down while low variant will continue to fall. This decrease could be linked with the low fertility rate during the 1990s where 1990s generation will start to enter the workforce around 2015-2020 years. In addition, it could be said that gradual improvement after 2020 could be associated with the increased TFR in the 2000s.

Taking into consideration all negative outlook for the future of the Russian labor market migration could play an important role in the solution part of the depopulation and shrinking number of workers. However, at its current level migration flow is not large enough to compensate the losses in the population and in the labor market. For instance, according to Rosstat’s forecast in order to cover the natural decline in population with migration flow, in future the net migration number needs to be increased by 39% in 2020, 71% in 2025 and 83% in 2030 than the medium variant forecasts of net migration to Russia (Rosstat, 2010).

In conclusion, deterioration in depopulation and both shrinking and aging workforce will intensify the problems of the Russian labor market. This is a due number of workers who will retire between 2015-2020 years is larger than the new young workers who will join the workforce. The only solution that could have a significant effect over the short period is to attract more immigrants and migrant workers to the country. On this point, Russia needs to increase its attractiveness for migrant workers from neighboring countries in addition to Central Asian ones.

Investopedia (2016). What is the ‘Dependency Ratio’. Investopedia.com

ACRF (2016).Working-age Population is in Decline. Analytical Center for the Government of the Russian Federation.