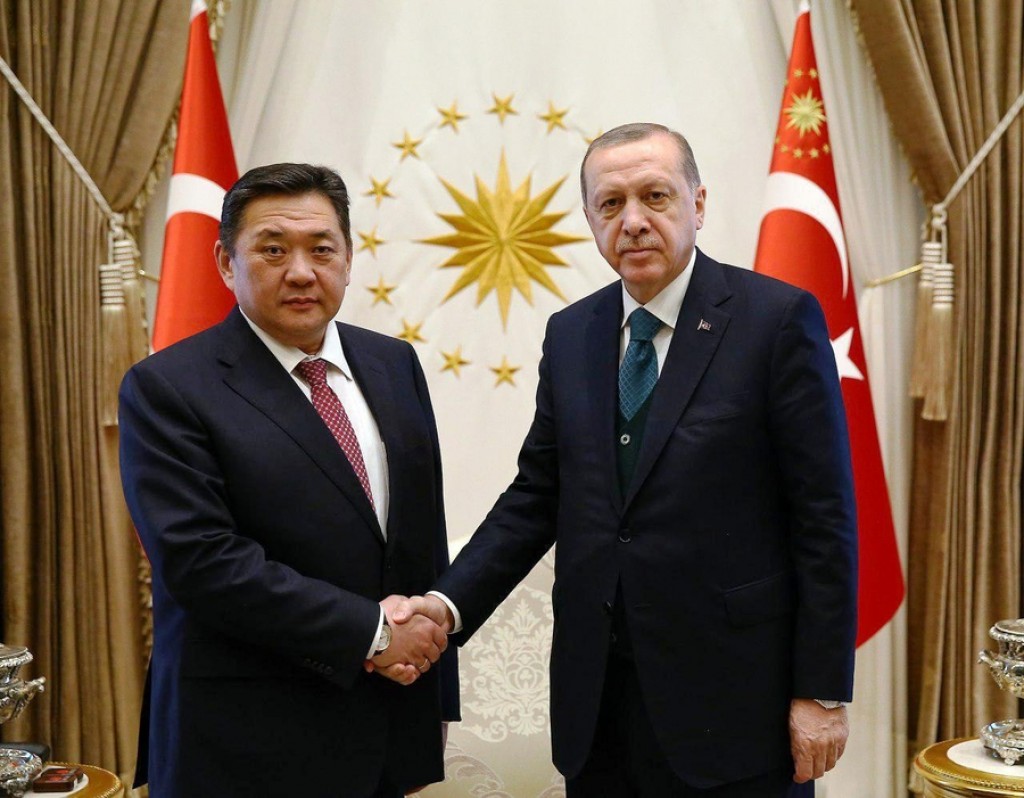 From Turkey’s perspective Mongolia is a very distant and little-known country with a small population. There is neither maritime connection between the two, because Mongolia is a landlocked country, nor direct active land transport route. In the pre-pandemic 2019 the bilateral trade between Turkey and Mongolia barely reached $43 million, which is less than 1% of Mongolia’s total foreign trade [UN Comtrade, 2019]. The amount of tourism between the two countries is also very small. Mongolia is not even among the ten largest destinations for tourists from Turkey [Amicusmongolia.com, 2019]. Nevertheless, since recently the two countries have been devoting much efforts to establish bilateral cooperation and intensify connections.

During most of the 20th century, due to its geopolitical position Mongolia has been destined to comply with its two giant neighbors in political, economic and ideological issues. After the collapse of the Soviet Union and diminishing of the geopolitical pressure from its northern neighbor, Mongolia came up with the foreign policy concept of “Third Neighbor” that was meant to help to counterbalance the overwhelming influence of China and Russia [Bishku, 2021]. The concept mentions the U.S., Japan, South Korea, Australia, Turkey, Germany, India, and Canada as third neighbors that Mongolia should develop friendly relations with in the first place. Several other eastern and western countries are also specified as the ones that Mongolia should consider as priority countries in building and formulating its foreign policy. Mongolia’s relative success in developing friendly relations and cooperation with Japan and South Korea over the last 2-3 decades can be attributed to the Third Neighbor concept.

Mongolia has managed to establish a rather successful cooperation with Japan since long ago. In 2017, the two countries celebrated the 45th anniversary of diplomatic relations. Japan has financed major projects of Mongolia in energy, transportation, infrastructure and mining. The visit of the Japanese Ex-Prime Minister Shinzo Abe visit to Mongolia has given a very significant impetus to the bilateral cooperation setting a Mongolia-Japan medium and long-term strategic economic partnership and launching Mongolia-Japan-U.S. trilateralism [Lkhaajav, 2017]. The bilateral trade between Mongolia and Japan during the pre-Covid-2019 period reached nearly $600 million, which is about 4.4% of Mongolia’s total trade [UN Comtrade, 2019]. Japan’s rivalry with China in the East Asian region is also a factor that makes it one the most suitable candidates for the third neighbor. Mongolia’s cooperation with the Republic of Korea has also seen a rapid development since Mongolia abandoned Communism. The trade between Mongolia and South Korea reached almost $295 million in 2019 [UN Comtrade, 2019]. The bilateral ties has become especially strong in the fields of education, humanitarian and cultural cooperation. For instance, education was specified as one of the top priority spheres of cooperation in the Republic of Korea’s Country Partnership Strategy for Mongolia 2016-2020 [Government of South Korea, 2017]. Another factor that plays an important role in establishing bilateral connections is the presence of a large number of Mongolian migrants in South Korea. Around 30 thousand Mongolians have been living in South Korea, which makes Mongolians the seventh largest ethnic diaspora in the country [Statista.com, 2017]. Due to intense human connections Korean language became one of the most learned foreign languages in Mongolia lately [Worldatlas.com, 2017].

Generally speaking, Mongolia’s foreign policy with other major actors has been rather consistent with the Third Neighbor concept. We can see it from Mongolia’s alignment in many international issues with the EU, reliance on Australia, Canada and the U.S. in building cooperation with the Asia Pacific region etc. When it comes to Mongolia’s relations with Turkey, it should be admitted that there is a tremendous undiscovered potential for cooperation that could serve for the good of the two countries. Turkey can become one of the leading countries within Mongolia’s Third Neighbor concept.

Mongolia and Turkey work closely on a number of issues and have warm and friendly relations. In April of 2013, then Prime Minister of Turkey Recep Tayyip Erdogan visited Ulaanbaatar where the Prime Ministers of the two countries signed several documents on bilateral cooperation [News.mn, 2013]. Since then high-ranking officials of both countries visited each other several times. The Minister of Foreign Affairs Mevlut Cavusoglu paid an official visit to Mongolia in April 2015. Prime Minister Binali Yildirim visited Mongolia three years later in April 2018. In July 2019, the Speaker of the Grand National Assembly of Turkey Mustafa Sentop paid an official visit to Mongolia [Mfa.gov.tr, 2021]. In March 2018, Mongolian Parliament Speaker Miyegombyn Enkhbold visited Turkey and held a meeting with the President Recep Tayyip Erdogan [Akipress.com, 2018]. Over the last ten years the sides made significant progress in developing bilateral cooperation in many areas. The Turkish Cooperation and Development Agency (TIKA) is actively working in Mongolia and has implemented projects worth tens of millions of USD since the beginning of its functioning in the country [Tika.gov.tr, 2021]. However, there it should be admitted that economic connections between Mongolia and Turkey are still weak. Turkey’s share in the FDI to Mongolia is less than 1% [Mongolian Statistical Service, 2021]. One of the problems that exists in developing the bilateral trade between the two countries is that the trade balance is extremely negative for Mongolia, because Turkey’s exports to Mongolia make over 95% of the bilateral trade. In general, we can state that Mongolia’s exports to other countries mainly consist of raw materials and commodities with low value added. Metals, coal and ores make nearly two thirds of Mongolia’s exports and the ratio of value to physical mass for this kind of commodity is very low. Consequently, the trade of these commodities requires very cheap transportation, which is not really the case with Mongolia and Turkey. Moreover, Mongolia’s mining sector is a relatively small industry with a high degree of competition between foreign companies backed by their states such as China, Russia, U.S. and Australia [Rodionov et al., 2016]. The total exports of Mongolia’s extractive and closely related sectors amount to nearly $6.5 billion [UN Comtrade, 2019]. The supply chains in Mongolia’s mining industry are interlinked with the industries of the main importing countries so that it is difficult for other importers to enter the market.

From the Turkish standpoint, establishing strong economic ties with Mongolia is one the primary objectives that requires a special approach. Turkey has been highly successful in building economic cooperation with Central Asian states after the collapse of the USSR becoming the most reliable and the most important trade partner in the Middle-East. When establishing economic relations with Central Asia, Turkey did not focus on the primary sectors of economies, although primary commodities make an important share in Turkey’s trade with Central Asia. One of the key components of Turkey’s success in building its cooperation with Central Asia was the establishment of human to human connections through appealing to ethnic, cultural and social links. This effect has had economic dimensions as Turkish private companies working in different sectors established their presence in Central Asian markets contributing to economic relations between Turkey and Central Asia [Toplu, 2020]. Building a solid economic base for bilateral partnership between Mongolia and Turkey within Mongolia’s Third Neighbor concept requires similar comprehensive approaches that would take into account Mongolia’s economic interests in diversification of its economy and investments in non-extractive industries.

It is also important to note that Turkey’s potential success in Mongolia’s concept of the “third neighbor” are backed with strong political and geopolitical factors. Mongolia is a continental country without access to the ocean and therefore should rely more on partnerships with the major countries of the Eurasian continent. In this sense, it is a priority for Mongolia to build friendly relations with Europe, Japan, Korea and Turkey. Moreover, there is an important factor that makes Turkey the most desirable country on this list. Unlike other countries, Turkey’s desire for a strong partnership with Mongolia is not only due to economic pragmatism or competition with one of Mongolia’s two main neighbors. Turkey includes Mongolia in its Eurasian concept and in its aspirations to establish friendly relations with Mongolia is also explained by desire to establish long-term strong ties in the political, economic and socio-cultural spheres.

Mfa.gov.tr (2021). Relations between Turkey and Mongolia. Retrieved from http://www.mfa.gov.tr/relations-between-turkey-and-mongolia.en.mfa. Accessed on 28.02.2021.

Rodionov V., Aktamov I., Badaraev D., Badmatsyrenov T. Kombaev A. and Dorzhieva I. (2016). Foreign powers competition in the mining sector of Mongolia. Web of Conferences, 01137.

Statista.com (2017). Number of foreigners living in South Korea in 2017, by country. Retrieved from https://www.statista.com/statistics/934118/number-immigrants-living-south-korea-by-country-of-origin/. Accessed on 26.02.2021.

Worldatlas.com (2017). What languages are spoken in Mongolia? Retrieved from https://www.worldatlas.com/articles/what-languages-are-spoken-in-mongolia.html. Accessed on 26.02.2021.