ZIPF’s Law and Economics of the Cities in Kazakhstan 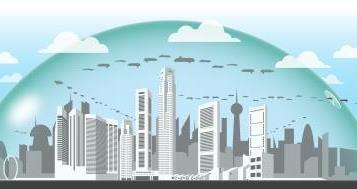 During the Soviet era, the urban and regional development in Kazakhstan was strictly regulated and often based on means other than economic. With the collapse of this system, Kazakhstan, just like the rest of the Soviet Union, was fully exposed to all kinds forces that shaped current urban and regional systems. Currently, Kazakhstan is a country with growing urban population. Nearly 57.4% (10.4 million) of its population live in urban areas. Perhaps, one of the well-known linkages between demographics and urban economics is the Rank-Size Rule. German geographer Felix Auerbach (1913) noted an interesting empirical regularity: analyzing the size distribution of cities, he found that the product of the population size of a city and its rank in the distribution appears to be roughly constant for a given territory. Very often, the Rank-Size Rule is referred as the Zipf’s Law. However, the Zipf’s Law (Zipf, 1949) states that the size distribution of cities follows a simple Pareto distribution with shape parameter equal to -1. Thus, the Zipf’s Law is a more particular case of the Rank-Size Rule (Brakman et al, 1999) and one of the most robust statistical relationships known so far in economics (Melnikova, 2012).

Kazakhstan is rarely mentioned in the context of the Rank-Size Rule or the Zipf’s Law in the academic literature. It has been found that the shape the Zipf’s Law does not hold for Kazakhstan and the shape parameter is equal to -0.95 (Akseki et al. 2014). Studies on Kazakhstan, Belarus, and Russia give results that deviate substantially from the Zipf’s Law (2009; Hill and Gaddy, 2003, pp. 19-21).

The mathematical description of the Zipf’s Law is as follows. According to Auerbach (1913), Singer (1936) and Zipf (1949) a city-size distribution tends to fit the Pareto distribution as R = AP(-a), where R is rank of a city, P is population and A is a constant. For our OLS estimation, we specify a log-log model like lnR = ln – a lnP. On the basis of the latest available data from www.citypopulation.de database for 2017 we found that the Pareto exponent for the Rank-Size relationship for Kazakhstan is equal to −0.7994 and it is statistically different from -1, which is quite interesting because many studies tend to reject the Zipf’s Law suggesting that the slope is greater than -1 in absolute terms, not smaller (Nitsch, 2005). Our estimation results of this model are represented in the Figure 1 below: 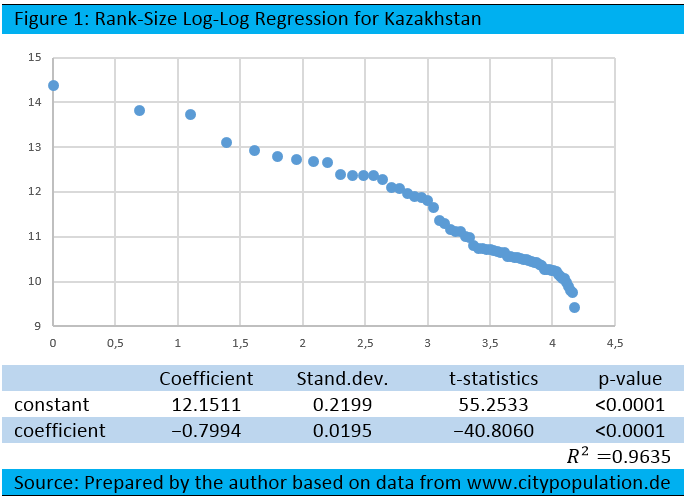 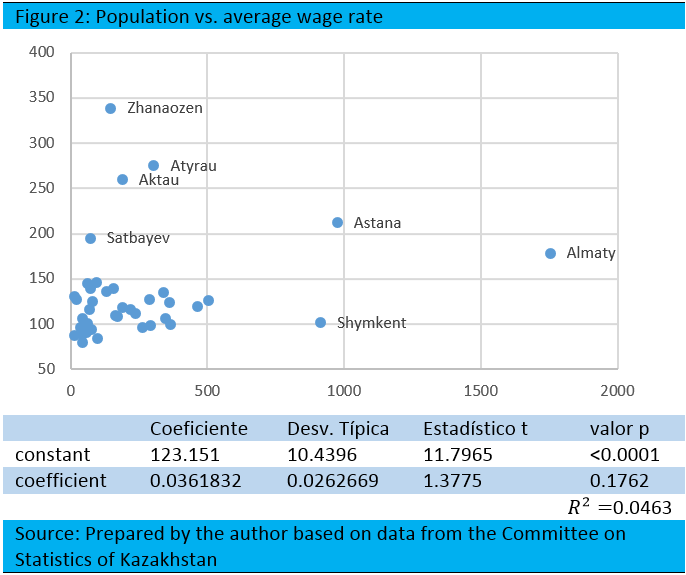 The size of the urban center affects the average wage rate, as it can be seen from Figure 2 above. The positive relationship suggests that the larger the city the higher the average wage rate with few outlying exceptions like Zhanaozen, Atyrau, Aktau, and Satbayev, which thanks to resource rents have outstandingly high rates of average wage despite their relatively smaller size. On the other hand, the city of Shymkent has relatively low average wage rate despite its large population, which partly can be explained by the oversupply of labor. 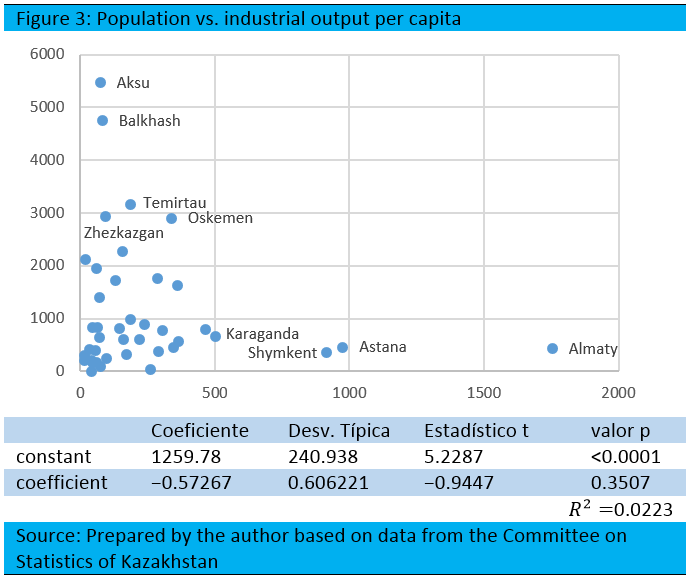 Surprisingly, the relationship between the city size and industrial output in urban areas of Kazakhstan appear to be negative, as it can be seen from Figure 3 above. That is, in larger cities the industrial output per capita turns out to be smaller than in smaller cities. The three largest agglomeration of Almaty, Astana, and Shymkent have lower industrial output per capita than most of the small and midsize towns. This contradicts the generally accepted rules based on the interdependence of localization of industries and agglomeration size described in Isard (1956), Shefer (1973) and Mills (1980). On the other hand, towns with the population under 100, 000 and the cities like Temirtau, Oskemen, and Zhezkazgan have much higher industrial output per capita. Industries in these towns and cities are usually based on a single plant that employs a significant share of the local population and plays a crucial role in the local economy. In case of Aksu (Pavlodar region), it is the “Aksu Ferroalloy Plant”, in Balkhash (Karaganda region) it is the Balkhash Mining and Smelting Complex and in Temirtau (Karaganda region) it is the Karaganda Metallurgical Plant. 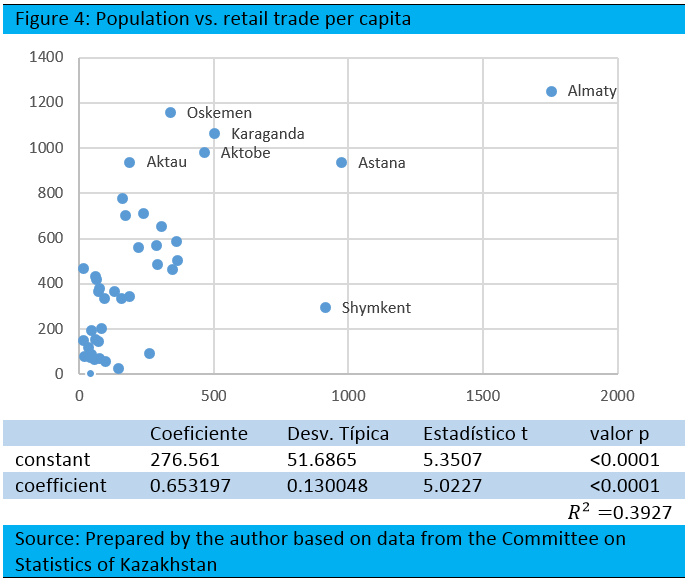 As it follows from the analysis, the Rank-Size Rule holds for the case of Kazakhstan and there is indeed a clear negative logarithmic relationship between the rank and the size of the cities and town. However, the analysis shows that the Zipf’s Law does not hold for Kazakhstan because the gradient in the relationship between the rank and the size of the cities in Kazakhstan expressed in a log for is equal to −0.7994 and is statistically very different from -1. This is an unusual case since although for many countries the Zipf’s Law does not hold the gradient in most of the cases is larger than -1 in absolute terms. Although there is no clear linearity, the relationship between the average wage rate and the size of the city is positive, which is consistent with the generally accepted theories in Urban Economics. In this regard, cities with large shares of the extractive sector like Zhanaozen, Aktau, and Atyrau show disproportionately high average wage rates, which is a direct consequence of resource rent. The two largest agglomerations of Almaty and Astana present high average wage rate whereas the city of Shymkent has the disproportionately low level of average wage rate. It is very interesting to note that the relationship between the city size and industrial output per capita in Kazakhstan is negative. Industrial production measured in per capita terms in smaller and mid-sized cities with heavy industry such as metallurgy turns out to be far much higher than in the three major agglomerations, which are perceived as the industrial centers of the entire country. The cities with highest industrial output are the ones that are highly dependent on large plants and are located close to the source of a certain natural resource. The per capita retail trade increases with the growth of the city population. However, the relationship between retail trade per capita and city population appears to be positive non-linear suggesting that the amount retail trade per capita grows fast up to a certain point with the growth of the city population and then it slows down and stops eventually.

Kazakhstan is a country with growing urban population. With only a few exceptions, the largest agglomerations and urban centers account for the major part of the total urban population growth whereas in smaller towns the population growth is not so rapid in relative terms. Thus, the current patter leads to a much faster relative growth of the few largest agglomerations relative to the rest of the urban centers. Wage rates on average tend to be higher in larger cities. However, average wage rates in smaller urban centers with oil industry tend to have extraordinarily high wage rates. The analysis also suggests that, on average, the larger the city size the lower becomes the industrial output measured in per capita terms. Retail trade, on the other hand, increases with the population growth. The importance of research on urban economics for Kazakhstan stems from several facts. Thus, geographically Kazakhstan has small population size and low population density, which makes it difficult for industries to benefit from economies of scale. The largest three agglomerations combined account for only about one-fifth of the total population and they are located quite far each other. Another factor is that Kazakhstan is a developing and rapidly urbanizing country where people from rural (Shedenova and Beimisheva, 2013) areas move to major agglomerations, which also implies serious challenges. Therefore, it needs sound and correct urban economic policies in order to benefit from these processes.