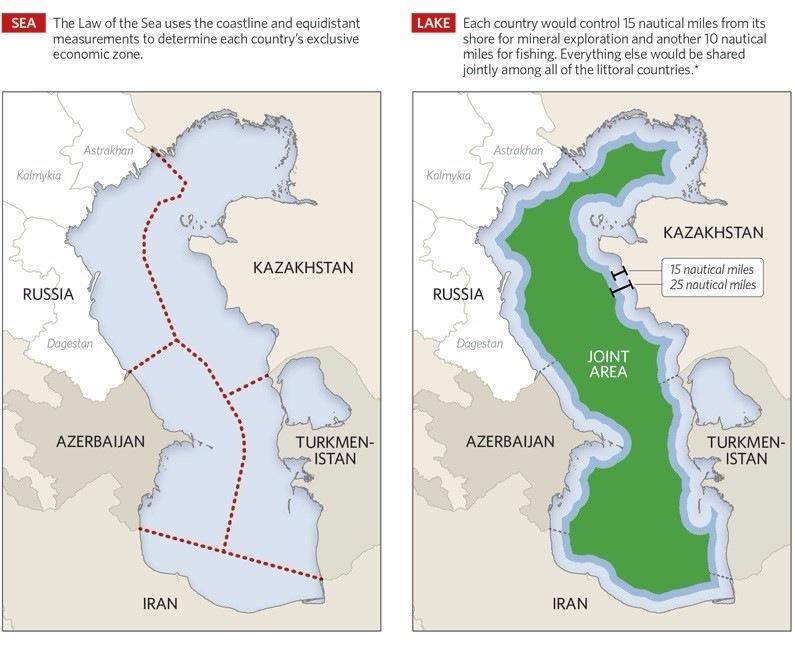 It is widely known that nowadays the littoral states of the Caspian region have moved far away from the legal-theoretical dilemma of whether the Caspian is a sea or a lake in a legal sense (Janusz-Pawletta, 2015). The countries bordering the Caspian Sea are trying to regulate all aspects of the legal use of the basin including maritime transportation, fisheries, security, trade and other issues. Determination of legal principles for the use of the Caspian seabed and subsoil is of paramount importance in order for the coastal states to finalize the draft Convention on the future legal status of the Caspian Sea. Therefore, it is obvious that the negotiating parties will continue to work on a comprehensive legislation establishing legal conceptions of the future regime of the Caspian Sea.

Evaluating the results of decades-long negotiation process over the legal status of the Caspian Sea it becomes evident that the parties decided to apply only some provisions of the United Nations Convention on the Law of the Sea of 1982 concerning regimes and width of the various parts of the sea. Actually, nowadays the Caspian Five jointly agreed to follow “common waters, divided bottom” approach. Therefore, there is no need to decide, which of two sets of public international law should be applied to the Caspian. As shown in Figure 1, in case of using the law of the sea, the parties should determine each country’s economic exclusive zone with the coastline and equidistance measurements. However, in case of using the customary international law governing border lakes law, each country would control 15 nautical miles from its shore for mineral exploration, and another 10 nautical miles for fishing. (Coffey, 2016)

Moreover, each of Caspian Five states clearly declared that current situation with regard to gas and oil exploration requires the formation of a comprehensive legal status for the Caspian. For instance, to date, the Treaty of Friendship between the RSFSR and Persia of 1921 and the Agreement on Commerce and Navigation between the USSR and Iran of 1940 are de jure in force. However, these two documents are basically regulated fishing and navigation without mentioning regulations on activities in extractive industries. Therefore, such situations highlight the need to develop new approaches to addressing the offshore hydrocarbon production in the Caspian Sea.

Figure 1. Defining the Caspian Sea: a Sea or a Lake? 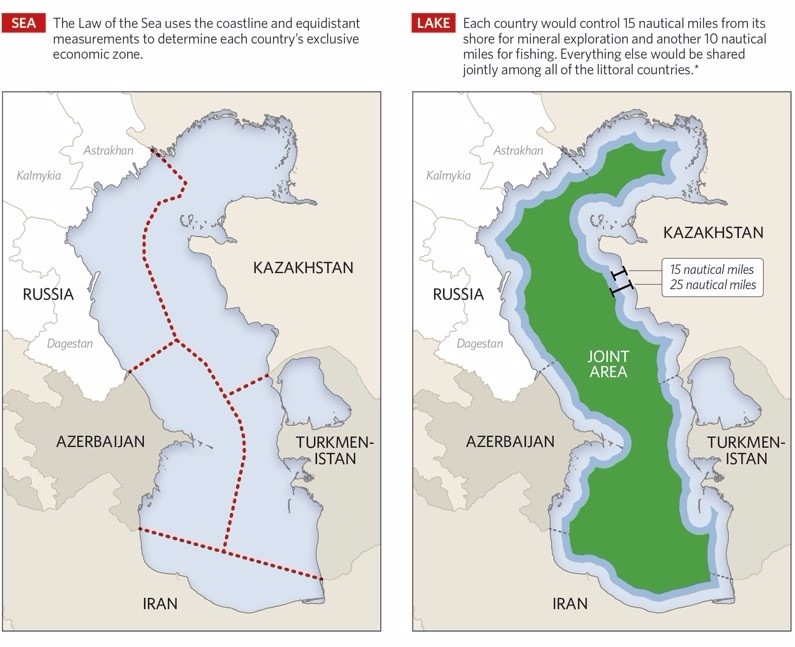 Since 1996, the negotiations on the elaboration of the Convention are held within the framework of the Special Working Group (SWG) at the level of the Caspian states’ Deputy Ministers of Foreign Affairs and bilateral and trilateral consultations. (Ministry of Foreign Affairs of Kazakhstan, 2014) To date, the SWG held 46 meeting, the most recent of which took place in Astana on July 11-12, 2016. One of the positive achievements of the SWG meetings was the preparation of the ground for the expanding international treaties from bilateral to multilateral basis. Actually, the very first agreement of so-called updated list of treaties over the Caspian legal regime was signed in Tehran in 2003. For instance, the Framework Convention for the Protection of the Marine Environment of the Caspian Sea was a historic breakthrough to develop the common vision on the issue of the environmental policy in the Caspian region. To date, the parties could manage to adopt three out of four additional Protocols[1] to the Tehran Convention and agreed to establish a permanent Secretariat of the Convention, under the administration of the United Nations Environment Programme (UNEP). The Secretariat, which has been administered ad interim by the UNEP Regional Office for Europe in Geneva since 2003, was supposed to start operation in the Caspian Sea region by 2015. (United Nations Environment Programme, 2014)

However, despite the fact that the SWG consultations were established as a result of littoral states’ intention to intensify the negotiation process in the five-sided format it should be noted that the productivity of the SWG meetings is still questionable. It is not disputed that the SWG work laid the foundation for the further development of the Caspian dialog towards launching the Caspian Summit format of consultations. Actually, the emerged tradition of Presidents’ regular meetings have generated expectations to create a mechanism of cooperation which will help the countries in the region to find common ground in a stepwise definition of the status of the Caspian. (Sarsenbayev, 2002) It should be mentioned that the first two Summits held in Ashgabat and Tehran in 2002 and 2007 respectively have not moved the negotiation process on the issue of the legal regime of the Caspian Sea forward. However, last two meetings of the Caspian Five heads clearly showed that direct interference of the high-ranking officials could provide a significant impetus for problems solving.

Since the Caspian Summits can be considered as a demonstration of readiness of the states to regulate all discord at the negotiating table it is not surprising the parties have made some progress in addressing the draft Convention on the legal status of the Caspian Sea. Therefore, during the Astrakhan Summit, the leaders of the littoral states agreed to recognize a 15-nautical mile sovereignty space adjacent to each country’s shoreline and the exclusive right for each country to fish an additional 10 nautical miles beyond the 15-mile zone. It was the first joint decision that the Caspian Five heads officially declared in relation to the Caspian legal regime. Actually, Kazakhstan was the one who suggested to establish territorial sea[2], fishing zone[3]and common water area in the Caspian Sea.

In the wake of a breakthrough that has been achieved in ensuring finalization of the Convention on the legal status of the Caspian Sea, the Heads of the Caspian Five instructed their Foreign Ministers to accelerate the process of the signing of the final text of the Convention. Moreover, after the Caspian Summit in Astrakhan in 2014, it was announced officially that the parties have already come close to completing work on the five-sized document.

As a future host of the Fifth Caspian Summit, which should have been held in Kazakhstan in 2016, the President Nursultan Nazarbayev suggested trying to agree on a draft Convention by the next meeting of the Caspian state’s leaders in Astana. This fact imposed a special responsibility on the SWG and Foreign Ministries for reaching compromise on the issue of four major fundamental questions, namely, the determination of the methods of delimitation of the seabed, construction of maritime communications under the Caspian Sea including pipelines, civil and military navigation and transshipment. (Aitzhanova, 2016)

The format of the delimitation talks, which was first developed by Russia, Kazakhstan and Azerbaijan, became more preferable for the Caspian Sea division with the engagement of Turkmenistan. For instance, on December 2, 2014, the Agreement between Kazakhstan and Turkmenistan on the delimitation of the bottom of the Caspian Sea was signed. Therefore, all the Caspian Five states except Iran which continues emphasizing its desire to divide the Caspian Sea into 5 equal parts, 20% for each littoral state, have already agreed to use the method of the modified median line. However, it is important to highlight that without Iran’s approval all bilateral and trilateral agreements between Azerbaijan, Kazakhstan, Russia, and Turkmenistan should be classified as interim measures in the regulation of the legal regime of the Caspian basin.

During the last meeting of the Ministers of Foreign Affairs of the Caspian states held on July 13, 2016, in Astana, the Iranian side has confirmed its intention to search for its 20% share of the Caspian seabed. As a result, the high-ranking officials could not manage to prepare the final text of the Convention, which could be signed by the Caspian Five leaders during the forthcoming Astana Summit. It was officially announced that there are still a set of issues that require more complex evaluation, discussion and summing up.

There is no doubt that the consultations of the SWG will be continued in September in Tehran and in October in Ashgabat in order to create an environment for the next meeting at the Foreign Minister level, which will determine the exact dates of the Caspian Summit in Astana. However, there is no guarantee that the parties could manage to find a solution acceptable to all parties in the nearest future. Therefore, due to the absence of readiness of coastal states to accept a final document regulating all issues associated with the legal status of the Caspian Sea (Janusz-Pawletta, The Legal Status of the Caspian Sea: Current Challenges and Prospects for Future Development, 2015) we could witness the indefinite postponement of the Caspian Summit in Astana.

3) Janusz-Pawletta, B. (2015). The Legal Status of the Caspian Sea: Current Challenges and Prospects for Future Development (2 ed.). Springer-Verlag Berlin Heıdelberg.

6) Sarsenbayev, B. (2002). Kazakhstan’s Position Regarding the Legal Status of the Caspian and Outlook for Economic Development of the Region. Kazakhstan (2), 50-56.

[1] Additional Protocols to the Framework Convention for the Protection of the Marine Environment of the Caspian Sea are international treaties that oblige the parties to work together and guide them in the conservation and restoration of the unique Caspian habitats and species. The most recent of these, namely, the Biodiversity Protocol, was signed in Ashgabat in 2014. The first two were signed in 2011 and 2012, namely, the “Aktau” Protocol on regional cooperation in addressing oil spills, and the “Moscow” Protocol on the protection of the Caspian Sea against land-based sources of pollution.

[2] External border of the territorial sea should be the state border within limits of which the littoral state will exercise its sovereign rights.

[3] The width and regime of the fishing zone should be agreed with the Caspian states. Fishery and use of bio-resources should be allowed in corresponding fishing zones on the basis of agreed catch quotas and license.