Economic Cooperation between Central Asia and the European Union 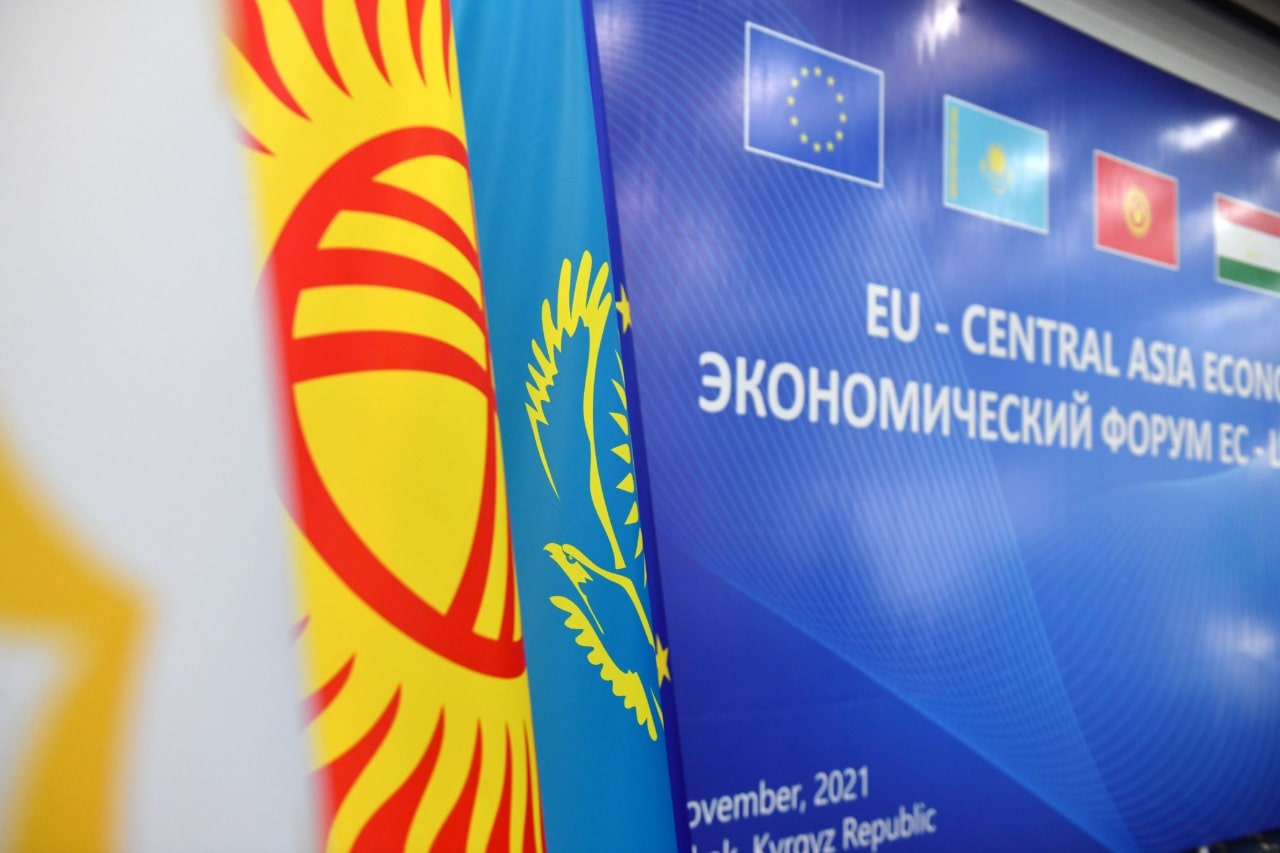 Countries of Central Asia consider cooperation with the European Union (EU-27) as one of the most important strategic directions. They intend to intensify trade with the EU countries and attract investments. The EU remains important due to different factors, including the market size, income level, standards, competition, and trade rules. On November 5, 2021, the European Union – Central Asia Economic Forum took place in Kyrgyzstan within the framework of the EU Strategy on Central Asia adopted in 2019. The strategy aims to strengthen economic ties between the regions. The three main areas of the Forum were green recovery, digitalization, and a better business environment. Prime Ministers and Deputy Prime Ministers of Central Asian countries as well as Ministers and high-level officials from more than 15 EU Member States participated in the Forum. In a joint press statement participants confirmed their commitment to strengthen EU-Central Asia cooperation to support the transformation of Central Asian economies into diversified and competitive private-sector driven economies [European Commission, 2021].

Within the Forum, the Prime Minister of Kazakhstan Askar Mamin proposed to set up a European Union – Central Asia Business Council, which would bring together representatives of governments and financial institutions, as well as businesses to facilitate trade and investment. The Prime Minister mentioned that over the past 10 years, EU member states had invested more than €105 billion or $121.3 billion in Central Asian countries, which exceeds 40% of the total amount of foreign direct investment in the region. The EU accounts for more than a third of total foreign trade in Central Asia. Mamin proposed to boost European investments in the region using the Astana International Financial Centre as nearly 70 European companies are registered in the center and enjoy a favorable tax, visa, and labor regime offered for the center’s partners [Astana Times, 2021].

Recently, the President of Kazakhstan Kassym-Jomart Tokayev had a meeting with the President of the European Council Charles Michel. The parties discussed the state and prospects for strategic partnership between Kazakhstan and the European Union with a focus on political, trade, and economic cooperation. President Tokayev noted that for the past three years Kazakhstan and the EU built strong relations, based on trust, mutual respect, and common priorities. The Head of State also highlighted the dynamic development of trade, economic, and investment ties. The President mentioned that the EU is one of the largest investors in Kazakhstan’s economy with a total amount of investments of $160 billion [Kazinform, 2021].

Indeed, the European Union countries remain a strategic trade partner for the Central Asian states, in particular for Kazakhstan. Figure 1 shows that in 2001, Central Asia’s exports to the EU exceeded $3 billion, while its imports amounted to $2.4 billion. In the following period, the region’s exports increased significantly and the trade balance also widened. Central Asia’s exports peaked in 2012 exceeding $46 billion. The global financial crisis and the drop in oil prices negatively affected the region’s supply.

As a result, the exports of Central Asia to the EU market decreased to $18.6 billion in 2016. In 2020, the indicator amounted to $18.2 billion, remaining the lowest level during the last decade. In the same year, the EU’s exports to Central Asia equaled $10.2 billion.

Kazakhstan’s share in Central Asia’s total exports remains significant. The indicator changed from 64% in 2001 to 97% in 2020. At the same time, the share of Kazakhstan in the region’s total imports demonstrates a reduction. It decreased from 64% in 2001 to 57% in 2020. For the reported period, Uzbekistan started to purchase more products from the EU countries. The country’s share in the region’s total imports increased from 22% in 2001 to almost 33% in 2020. The shares of other countries remain insignificant. In 2020, the indicator for Turkmenistan amounted to almost 6%, while the value of Kyrgyzstan and Tajikistan correspondingly equaled 3% and 2%.

Central Asia’s exports to the European Union market mainly consist of mineral fuels. In 2001, the share of the mineral fuels exports in total exports amounted to 41% and increased to 90% in 2020. Thus, the export structure became less diversified, which puts the countries of Central Asia at additional risks. For instance, as was mentioned above, a decrease in oil prices led to a significant reduction in export values, increasing macroeconomic risks for Central Asia. At the same time, the countries of the region should take into consideration the energy policy of the European Union, which aims to develop renewable energy. Therefore, demand for fossil fuels may decrease, which can lead to further reduction of fossil fuel prices. The remaining exports of Central Asia consist of inorganic chemicals, metals, fertilizers, and agricultural products. Central Asia’s import from the EU countries is diversified and mainly consists of manufacturing products. For instance, in 2020, the shares of machinery in Central Asia’s total imports from the EU amounted to 32%, pharmaceutical products – 14%, electrical machinery, and equipment – 7%.

Implementation of institutional reforms affects bilateral relations of the Central Asian states and the EU members. For instance, the European Union granted Uzbekistan privileges of the Generalized System of Preferences Plus scheme due to positive economic and political reforms. By joining this scheme, low- and low-middle-income countries are committed to effectively implementing 27 core international conventions on human and labor rights, environmental and climate protection, and good governance. The GSP+ will allow Uzbekistan to export more than 6200 commodity items to the EU countries without tariffs, while under the standard GSP system a number of tariff-free commodity items amounted to 3000. The rest of 3200 commodities could be exported at reduced rates. The GSP+ scheme will boost bilateral trade between the country and the EU [UzReport, 2021a]. It is important to note that due to the successful ratification of the 27 key international conventions on human rights, labor standards, and the environment, Uzbekistan became the first beneficiary of the United Kingdom’s Extended Scheme of Generalized System of Preferences. Thus, more than 7800 types of goods produced in Uzbekistan will be imported into the UK at zero import duty. The United Kingdom, in turn, will have an access to Uzbekistan’s unique textiles, agricultural and other products [UzReport, 2021b].

Thus, the European Union remains the key economic and political partner of the Central Asian republics. The rapprochement of the regions is based on the EU’s strategy, within which they form joint platforms and conduct special forums. The EU remains a key trade partner of the region. However, Central Asia mainly supplies fossil fuels and its exports became less diversified. Therefore, the region needs to transform its economies and research the EU market to identify prospective directions for its producers. At the same time, institutional reforms in Central Asian countries as in the case of Uzbekistan may result in intensification and diversification of trade. Thus, penetration of the European market will require the successful implementation of economic and institutional reforms.

UzReport (2021a). Uzbekistan joins the EU’S GSP+ arrangement. Retrieved from https://uzreport.news/economy/uzbekistan-joins-eu-s-gsp-arrangement. Accessed on 10.04.2021.

UzReport (2021b). Uzbekistan – the first beneficiary country of the UK’s Extended GSP scheme. Retrieved from https://uzreport.news/economy/uzbekistan-the-first-beneficiary-country-of-the-uks-extended-gsp-scheme. Accessed on 23.11.2021.