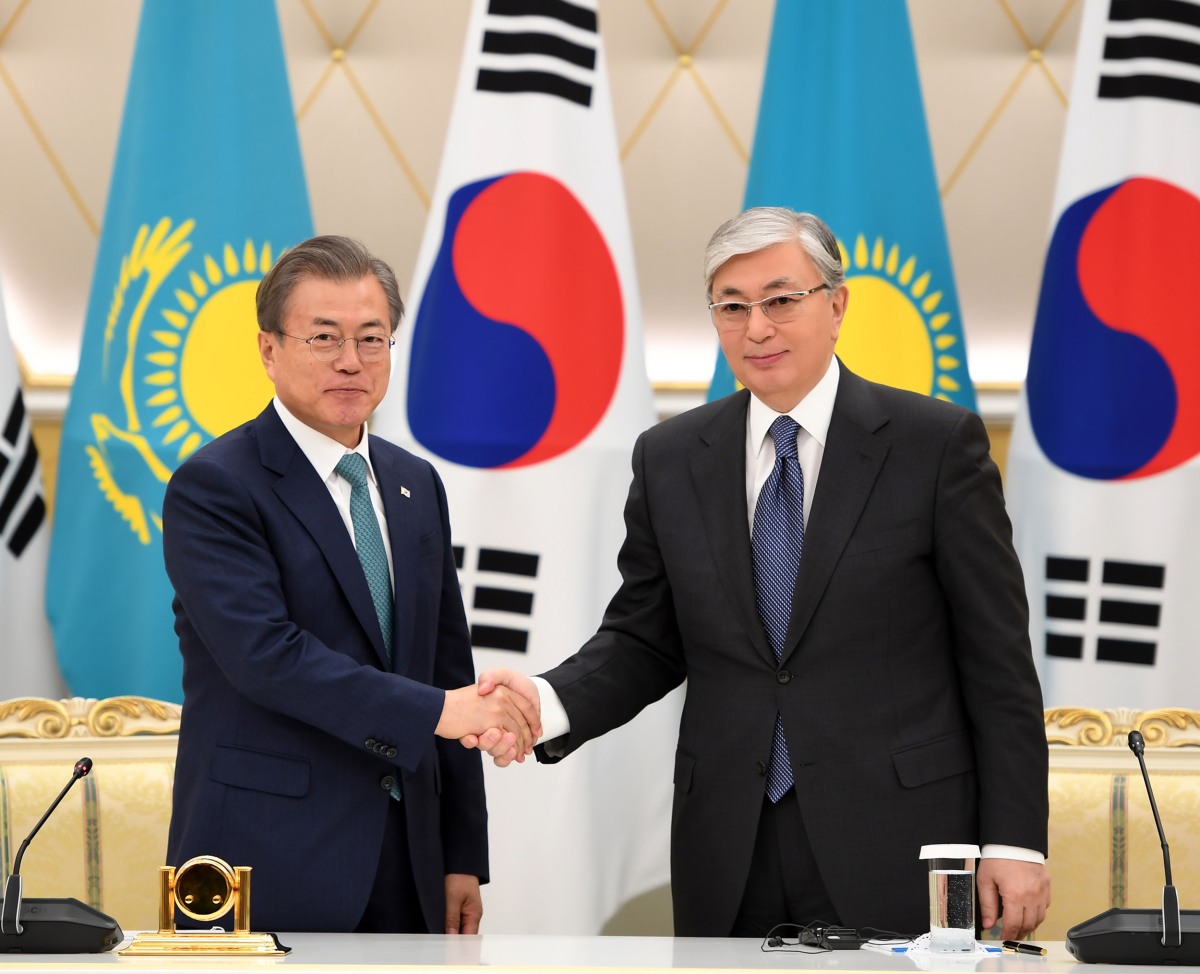 South Korea’s relations with Kazakhstan have been implementing within the new economic cooperation program Fresh Wind for 2019-2022, which was announced during the visit of President Moon to Kazakhstan in April 2019. The program implies the implementation of 58 projects in 10 areas, including transport and logistics, construction, industry, infrastructure development, mining and metallurgy and subsoil use, trade and economic cooperation, energy, innovation and ICT, agriculture, finance, and healthcare [The Korea Post, 2019]. During President Tokayev’s visit, leaders also decided to enhance cooperation within the program in the energy industry sector, in Fourth Industrial Revolution sectors and in the commercialization of 5G networks, whilst Kazakhstan also interested in deepening cooperation in digital infrastructure, artificial intelligence, big data, space and cybersecurity [Korea Times, 2021].

Seoul’s comprehensive engagement with Kazakhstan started during the presidency of Roh Moo-hyun (2003-2008), whose administration launched the first strategy for the Central Asian region called the Comprehensive Central Asia Initiative in 2004. President Lee Myung-bak (2008-2013) continued to prioritize the Central Asian region and adopted the New Asia Initiative in 2009, which intended to broaden Korea’s cooperation with Asian states going beyond its traditional focus on the US, China, and Japan. President Park Geun-hye (2013-2017) further proposed the Eurasia Initiative, aiming to link the Eurasian continent through developing trade, energy, and logistics infrastructure. The current president Moon Jae-in similarly followed his counterparts’ line and initiated the New Northern Policy, also focused on connecting the Korean Peninsula with the Eurasian continent through networks of transport and energy connections. Kazakhstan, situated in the heart of Eurasia, in all initiatives of South Korean leaders hold strategic significance, which is seen in the fact that all South Korean leaders visited Kazakhstan in the frame of their signature initiatives. The strategic partnership concluded in 2009 is another confirmation of the level of cooperation.

Economically, Kazakhstan is the major trading partner of South Korea in Central Asia, with around 51% of Korean exports going to Kazakhstan out of all Central Asian states [The Oxus Society, 2021]. Bilateral trade reached its highest amount of $4.22 billion in 2019 from the $1.53 billion in 2017. Although due to the pandemic, the trade volume was declined to $3.09 billion in 2020, the current tendency demonstrates steady growth at the pre-pandemic level [Korea Times, 2021]. Nevertheless, the trade imbalance is still substantial, as Korean exports to Kazakhstan exceed almost three times the amount of Kazakhstan’s imports to South Korea [Oh, Zholamanova, 2021]. South Korea is also among the largest investors in Kazakhstan, which invested over $5.5 billion during 2005-2018,koreinter whkoreilst Kazakhstan’s investment into the South Korean economy amounts to around $2.2 million during the same period [Oskenbayev, 2020]. In 2020, Korea’s investments in Kazakhstan boosted from $7 million to $74 million [Korea Times, 2021]. It is also expected to implement 16 investment projects worth $ 1.5 billion in the automotive industry, housing construction, metallurgy and agriculture in the coming years [Kapital, 2021]. Over 500 Korean companies are working in Kazakhstan, in addition to 1,081 enterprises that are registered with the participation of Korean representatives [Oskenbayev, 2020].

In addition to political and economic cooperation, the Korean diaspora with over 100.000 ethnic Koreans living in Kazakhstan remains an important part of reciprocal ties. South Korean organizations support the Association of Koreans of Kazakhstan, the Korean Cultural Centre in Nur-Sultan, the national “Kore Ilbo” newspaper, cultural and educational activities and projects throughout the country. Kazakhstan Koreans moving to their historic homeland also helps to build contacts, especially given that their number significantly increased from 368 issued F-4 visas (Overseas Korean multiple entry visa valid for 5 years) for ethnic Koreans in 2010 to 5.215 in 2019. At the same time, considering that a relatively low number of them applied for naturalization in South Korea, it could be assumed that Kazakhstan remains their home [Oh, Zholamanova, 2021].

Besides ethnic Koreans, South Korea remains among the top destinations of Kazakhstan’s labor migrants. Specifically, illegal labor migration is flourishing among Kazakhstan citizens, growing from 359 in 2004 to 12.000 people in 2019, whilst the volume of remittance from South Korea to Kazakhstan increased from $1.7 million to $105 million between 2012 and 2019 [Karimova, 2021]. In the majority, labor migrants are involved in low-paid jobs in the industrial and agricultural sectors.

Education sector is an equally important area of cooperation. Thanks to scholarships provided by the Overseas Koreans Foundation scholarship, Korea International Cooperation Agency and other institutional programs of exchange, study in South Korea became among the popular destinations of Kazakhstan students. Korean students demonstrate an interest in studying in Kazakhstan as well, which stimulates mutual movements of students that is increasing year by year.

Overall, it could be summarized that despite South Korea’s foreign policy with the Central Asian region being formed within its strategy as a middle power, the relationship with Kazakhstan is built more on a pragmatic approach and on people-to-people contacts. Large Korean diaspora impacts the bilateral mood of relationships, as well as on maintaining business ties. Outcomes of cooperation are also illustrated in the number of Kazakhstan citizens residing in South Korea that boosted from 3.000 people in 2014 to 22.000 in 2019, whilst in 2021 the number reached around 30.000 people [Liter, 2021]. Acknowledging such developments, sides agreed to strengthen people-to-people exchanges by appointing the year 2022 as the Year of Korea-Kazakhstan Cultural Exchange.

Karimova, Jamilya (2021). The government was offered to help illegal Kazakhs in South Korea. Retrieved from https://lsm.kz/koreya. Accessed on 11.09.2021.

The Korea Post (2019). Republic of Kazakhstan – Republic of Korea: towards new horizons of cooperation. Retrieved from http://www.koreapost.com/news/articleView.html?idxno=10030. Accessed on 11.09.2021.