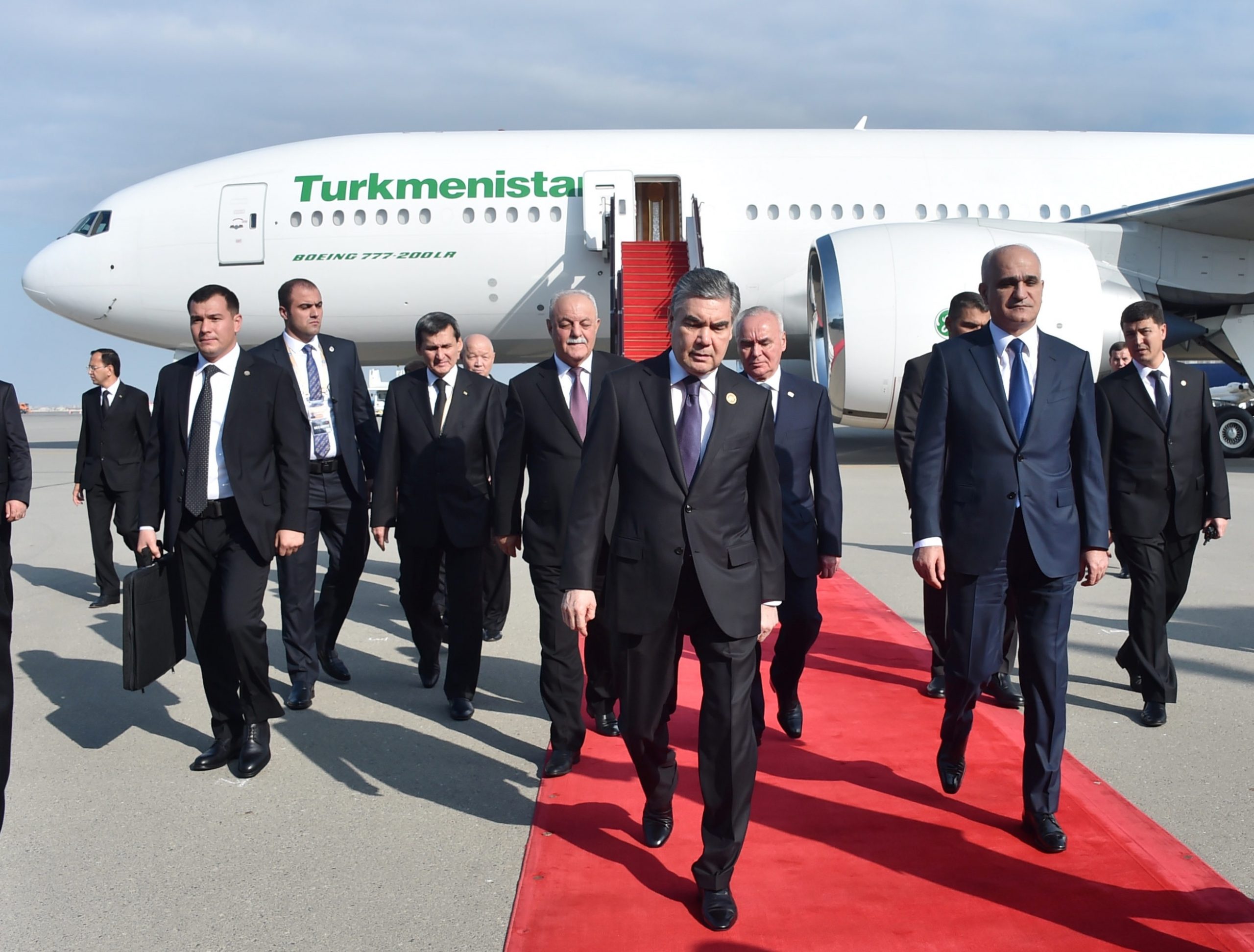 Turkmenistan, under its first president Saparmurat Niyazov, proclaimed its permanent neutrality status on December 12, 1995, when the UN General Assembly adopted a special resolution on the issue, which was backed by a relevant constitutional law. Since then, the doctrine of ‘positive neutrality’ has become the basis of the country’s foreign policy as Ashgabat avoids involvement in any military or political blocks or activities. The proclamation of that status was a unilateral voluntary act of Turkmenistan that lacks guarantees from other states but is supported by the UN [Yapici, 2017]. However, Turkmenistan cannot stand aside from the geopolitical changes in the region. Whilst the regional states, during the past several years, have been experiencing significant changes in both their internal and external politics due to power transitions in Uzbekistan, Kazakhstan, and Kyrgyzstan, the leadership of Turkmenistan also seeks to respond to the current trends by being more active in international and regional politics.

Turkmenistan aims to strengthen its position through developing transit routes and diversifying markets for hydrocarbon exports, simultaneously limiting the interference of outside actors and remaining relatively aloof of geopolitical ambitions of its neighbors [Bohr, 2016]. As a result, Turkmenistan nowadays is among the world’s most isolated countries with a closed political system and society.

Turkmenistan’s foreign policy is pursued under the Concept of Foreign Policy of Neutral Turkmenistan for 2017-2023 with the aim to systematically strengthen its bilateral relations with other states and cooperation with international organizations, whereas the main anchors of external collaboration are Turkmenistan’s energy and cotton exports. Namely, Turkmenistan has 19.5 trillion cubic meters (cbm) of gas reserves, which is around 9.9% of total world reserves. There is also limited oil production at around 10.6 million tons per year, which allows covering domestic consumption. Turkmenistan is also the ninth largest cotton producer in the world [Hug, 2019].

Accordingly, Ashgabat’s foreign strategy prioritizes its energy exports, which represent around 80% of its export revenues, and aims to diversify its export destinations. While, during the Soviet period, Turkmenistan supplied gas to its neighboring republics, after the independence, its major gas export destinations were Russia that re-exported the Turkmen gas to Europe via the Soviet-era pipelines and Iran – through a pipeline that was completed in 1997. But in 2009, Russia halted its gas imports due to Turkmenistan’s rejection to renegotiate the rates following the drop in world gas prices during the 2008 crisis. By 2011, the sides agreed to resume the supply of gas but Russia gradually decreased its volume until the full rejection of gas purchases at the end of 2015 [Pannier, 2019]. Iran, which purchased Turkmen gas in a barter system, also suspended its procurement in 2017 due to Ashgabat’s claim about Tehran’s debt of $1.8 billion for supplies purchased 10 years before. Despite Russia resumed the import of Turkmen gas in April 2019, Turkmenistan has already diversified its gas exports eastward. China has become the largest recipient of the Turkmen gas, having exported 90% of its volume in 2017, which accounts for around 27% of China’s total gas imports [Laumulin, 2018].

At the same time, the export of Turkmen gas to China is limited to 35 billion cbm per year due to the capacity of the Central Asia-China gas pipeline that passes through the territories of Uzbekistan and Kazakhstan [Laumulin, 2018]. The so-called Line D of this pipeline that is supposed to go via Tajikistan and Kyrgyzstan was postponed several times despite its planned completion in 2016.

Meanwhile, Turkmenistan takes active steps to finally implement the Turkmenistan-Afghanistan-Pakistan-India (TAPI) pipeline  project. In February 2018, President of Turkmenistan Gurbanguly Berdimuhamedov participated in the ground-breaking ceremony of Afghanistan’s section of TAPI in the Afghan province of Herat. Moreover, the construction of the pipeline through the Turkmen territory is nearing completion, and President Berdimuhamedov signed a decree in early January 2020 allowing Vnesheconombank to request a loan for the construction of TAPI from the Saudi Development Fund. It is noteworthy that 85% of shares of the TAPI Pipeline Company Ltd belong to Turkmengaz, whereas the Afghan Gas Corporation, Pakistan’s Inter State Gas Systems and Indian GAIL have a 5% stake each [Hronikatm.com, 2020]. However, at present, with TAPI being a distant perspective, China is the only major exporter, which makes the Turkmen economy vulnerable. Turkmenistan possesses the fourth largest gas deposits in the world, but its political and geographical isolation limits the gas export potential of the country, especially taking into account that the country is surrounded by the world’s largest gas exporters that are interested in exporting their own gas.

Beside the energy sector, Turkmenistan’s agricultural sector, mainly cotton and wheat production, has a significant share in the country’s GDP with 13% and employs approximately half of the population. Turkmenistan supplies China, Russia, the UK, South Korea, Turkey, Iran, Indonesia, Singapore, Ukraine and the Baltic countries with cotton sold at auctions of the country’s commodity and raw materials exchange [Hug, 2019].

However, in recent years, Turkmenistan has been facing a substantial crisis due to a reduction in revenues in the main sectors that support economy – energy and agriculture. Numerous reports indicate the shortage of basic food items and queues for bread stretching outside state stores. The reduction of domestic production, in addition to the deficit of basic, largely imported, consumer goods due to the rising inflation rate (estimated at about 294% by foreign economists), causes difficulties for the country’s economy [Jakóbowski and Marszewski, 2018]. As a response, the government introduced reforms, including a gradual abolition of subsidies that guaranteed large volumes of free gas, water and electricity to Turkmen citizens in 2017. At the same time, Turkmen diplomats increased their efforts in attracting foreign investments, which is somewhat problematic, given that Turkmenistan is not even listed in the World Bank’s “Doing Business” index, while in the Transparency International’s Corruption Perceptions Index Turkmenistan is ranked 161st out of 180 surveyed countries in 2018 [Transparency International, 2019].

Meanwhile, Turkmenistan has become more active in developing cooperation with the post-Soviet states. In 2019, Turkmenistan assumed the rotating CIS chairmanship, within which it hosted the CIS heads of state summit in October 2019. In August 2019, Turkmenistan hosted the First Caspian Economic Forum in the resort town of Awaza near the Caspian port of Turkmenbashi. In November 2019, President Berdimuhamedov participated in the second consultative meeting of the heads of the Central Asian states in Tashkent. In 2017-2019, Turkmenistan chaired the International Fund for Saving the Aral Sea and initiated the adoption of two resolutions of the UN General Assembly on cooperation between the UN and the fund [Turkmenportal, 2019].

As for bilateral cooperation, Turkmenistan mainly focuses on the neighboring countries. Russia is among the strategic partners, relations with which have significantly improved in recent years. With Kazakhstan, Turkmenistan cooperates in the field of maritime transport and in the creation of an international transit telecommunication system “Turkmenistan – Kazakhstan”, in addition to the Kazakhstan-Turkmenistan-Iran railway that is expected to be fully operational in 2021. With Kyrgyzstan, Turkmen authorities agreed on the construction of the gas pipeline along the Turkmenistan-Uzbekistan-Tajikistan-Kyrgyzstan-China route and intensified joint work in the fields of industrial cooperation, agribusiness and communications. The priority areas of cooperation with Tajikistan are transit and trade, with Tajikistan purchasing petroleum products, liquefied natural gas, refined cottonseed oil, and cement from Turkmenistan. Relations with Uzbekistan in recent years were upgraded to a strategic level. Thus, according to President Berdimuhamedov, Turkmenistan will continue to expand friendly and good neighborly relations with the Central Asian countries, with which it is united by historical and cultural ties [Turkmenistan News Gazette, 2019; Laumulin, 2018].

On the other hand, Afghanistan remains the main security concern not only for Turkmenistan but also for the regional states. Nevertheless, during 2018, Turkmenistan and Afghanistan reached a number of valuable results. In addition to the opening ceremony of the Afghan section of the TAPI gas pipeline, President Berdimuhamedov participated in laying the foundation of the Turkmenistan-Afghanistan-Pakistan transmission line and fiber-optic cable, as well as the opening of the new Serkhetabat-Turgundi railway. Earlier, in November 2017, the parties also signed an agreement on the creation of the Afghanistan-Turkmenistan-Azerbaijan-Georgia-Turkey (Lapis Lazuli) transit corridor that is expected to connect mainly through railways and highways the Afghan province of Herat with the port of Turkmenbashi, thus creating vast opportunities for cooperation if implemented [Turkmenistan News Gazette, 2019]. However, given the instability in the northern regions of Afghanistan bordering Turkmenistan and Tajikistan, about which Moscow warned Ashgabat several times and even proposed its support in guarding the Turkmen-Afghan border, the Turkmen leadership has to pay more attention to maintaining its constant combat readiness to protect the borders rather than to implementing the above-mentioned projects.

It appears that by maintaining its ‘positive neutrality’ strategy, which aims at self-preservation from external influence, Turkmenistan has to work more closely with its regional partners, especially under the conditions of falling gas revenues and worsening socio-economic issues. Considering that China has become Turkmenistan’s main strategic partner by being an almost sole consumer of the Turkmen gas, the Turkmen authorities have to consider ways for diversifying its export partners and potential.

Hug, Adam (2019). Spotlight on Turkmenistan. Retrieved from https://fpc.org.uk/publications/spotlight-on-turkmenistan/. Accessed on 10.01.2020.

Jakóbowski, Jakub and Mariusz Marszewski (2018). Crisis in Turkmenistan. A test for China’s policy in the region. OSW Commentary, No. 284. Centre for Eastern Studies.

Laumulin, Murat (2018). Modern Turkmenistan in search of a way out of the transport and communication trap. Retrieved from https://isca.kz/ru/analytics-ru/3218. Accessed on 10.01.2020.

Pannier, Bruce (2019). Is Turkmenistan Being Pulled Into Russia’s Orbit? Retrieved from https://www.rferl.org/a/iqshloq-ovozi-turkmenistan-pulled-into-russia-s-orbit/29713898.html. Accessed on 10.01.2020.

Turkmenistan News Gazette (2019). President of Turkmenistan outlines key tasks in the field of foreign policy of the country. Retrieved from https://turkmenistannewsgazette.com/president-of-turkmenistan-outlines-key-tasks-in-the-field-of-foreign-policy-of-the-country/. Accessed on 10.01.2020.

Turkmenportal (2019). The foreign Ministry summed up the results of Turkmenistan’s chairmanship in the IFAS and the first CEF. Retrieved from https://turkmenportal.com/en/blog/24071/the-foreign-ministry-summed-up-the-results-of-turkmenistans-chairmanship-in-the-ifas-and-the-first-cef. Accessed on 10.01.2020.