Recent Developments in the Caspian Energy Strategy of Iran

Being an oil export based economy, which focuses on the development of oil and gas bearing areas originating in the Persian Gulf and the Gulf of Oman, Iran pays less attention to the Caspian region, where there is still much work to be done to develop sustainable exploration and production of oil and gas. In fact, the country is a latecomer in conducting exploration activities in the Caspian region. The first offshore hydrocarbon deposit in the Iranian sector of the Caspian Sea was discovered by Khazar Exploration and Production Co. (KEPCO)[1] in 2011. The Sardar-e Jangal field is located at Block 6.2, about 250 kilometers from the coastline of the Mazandaran province, 750 meters below the water surface. According to initial projections of the Iranian Ministry of Petroleum, the field contains total proven reserves of around 50 trillion cubic feet of natural gas (over 1.4 trillion cubic meters), which is ten times more than those of the Shah Deniz gas field, and about 10 billion barrels of oil. In 2012, an oil layer in Sardar-e Jangal field was discovered, namely, the Sardar-e Milli deposit, which is estimated to hold 2 billion barrels of oil with a recovery rate of 25%, or 500 million barrels. According to then Petroleum Minister Rostam Qasemi, the field contains light crude with zero sulphur content (API 39). It is expected that drilling 24 wells in the Sardar-e-Jangal oil field would allow a daily production of 95,000 barrels, while drilling 32 wells would result in 120,000 barrels a day (Iran Petroleum Monthly, 2013).

It is worth noting that in 2001 Tehran took the first steps to ensure the realization of the exploration activities in the Caspian Sea and the adjacent provinces of Mazandaran, Golestan, and Gilan following the geological and geophysical studies prepared by the South Caspian Study Group (SCSG)[2]. Right after the well-known military incident with British Petroleum (BP) in the Azerbaijani sector of the Caspian Sea[3] the Iranian Company SADRA started, under the Swiss company GVA’s license, to construct a semisubmersible platform designed for drilling at the disputable Alborz block, which the Azerbaijani side calls Araz-Alov-Sharg. However, a month after the First Caspian Summit held in Ashgabat in April 2002, Baku and Tehran officially declared that exploration works at the disputed offshore hydrocarbon fields would be stopped until resolving the border issue. As a result, the platform was used to conduct drilling operations on one of the eight priority structures selected under the SCSG study. The official ceremony of the commissioning of the Alborz platform, which was then renamed as Amir-Kabir, took place in the summer of 2009. 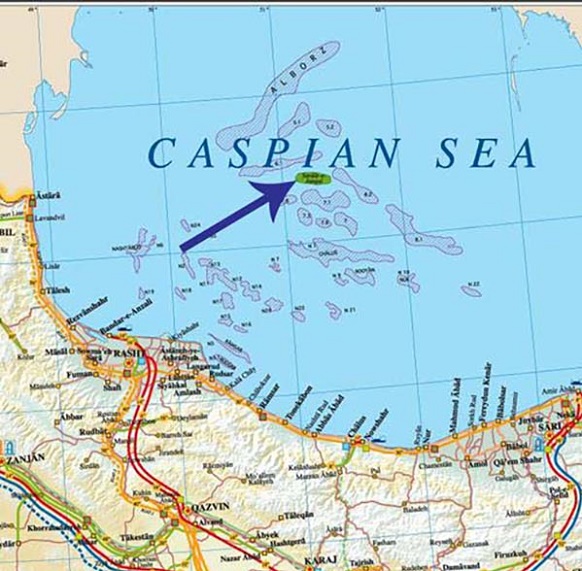 Despite the fact that the Iranian authorities strongly insist that Sardar-e-Jangal is the only indisputable oil and gas field discovered by KEPCO in the Caspian Sea, there is still a possibility that the field might legally belong fully to Azerbaijan, or be subject to shared ownership. Under these circumstances, there are signs that Iran would consider the option of jointly developing disputable Caspian oil and gas fields. For instance, speaking at the meeting with Azerbaijani President Ilham Aliyev held on the sidelines of the Iran-Russia-Azerbaijan summit in Tehran on November 1, 2017, Iranian President Hassan Rouhani stated that Iran was ready to cooperate with Azerbaijan in various industrial sectors including oil and gas swap, and exploration activities in the Caspian Sea region (Shana, 2017). Moreover, on September 28, 2017, at the invitation of Rovnag Abdullayev, head of Azerbaijan’s SOCAR, a delegation from KEPCO headed by Mohsen Delaviz, the company’s managing director, held talks in Baku on the issue of joint exploration and development of Caspian Sea oil and gas fields. In fact, the parties already signed a memorandum of understanding (MoU) on cooperation in the oil and gas industry in 2016. It is worth mentioning that Iran considers both Azerbaijan and Russia as energy partners in offshore oil exploration in the Caspian basin. For instance, on October 3, 2017, the Russian oil company Lukoil signed two preliminary agreements with the NOIC to study the Caspian Sea’s oil and gas potential. The agreement for a geological survey in the Caspian Sea coupled with a MoU signed between Lukoil and KEPCO paved the way for Russia’s second-largest oil producer to further cement its position in Iran’s petroleum market (Financial Tribune, 2017). Thus, it would be the first time for Iran and Russia to cooperate over an energy-related project in the Caspian Sea. However, while recognizing the significance of energy talks between Iran and other littoral states, it is important to note that recently signed agreements mainly demonstrate Iran’s desire, not full readiness, to launch energy cooperation in the Caspian Sea in the near future. It is obvious that Tehran has not yet made a groundbreaking move that could contribute to joint exploration activities in the region.

Since Iran’s capacity for further development of Caspian Sea resources is rather limited, in 2015, KEPCO introduced four energy projects in the Caspian basin to potential investors, namely, Blocks 24, 26 and 29[4], as well as the Sardar-e Jangal oil field, under Iran’s new model of oil contracts known https://www.cialissansordonnancefr24.com/cialis-20mg-prix/ as an integrated petroleum contract (IPC). In the following two years, Norway’s Offshore Resource Group (ORG) signed a MoU with KEPCO to study the development of all four projects. Thus, Iran managed to find an international energy company possessing special equipment and experience to extract oil and gas from deep waters.

It could be concluded that despite the fact that the groundwork has been laid by Tehran for the IPC-based development of the Sardar-e Jangal oilfield, the commercial production of oil and gas there is still a matter of the distant future. It appears that a key goal of Iran’s energy strategy in the region is mainly to conduct exploration activities. Given that Iran lacks cost-efficient technologies of deep water drilling, extraction of oil and gas from the Caspian deposits is on the agenda, but in the long-run perspective. However, it is no doubt that the development of the Sardar-e Jangal and Sardar-e Milli fields could open a new chapter in hydrocarbon production in the Caspian Sea.

CaspianEnergy. (2015). The field is slipping through the fingers – why SOCAR and Ministry of Foreign Affairs taking no action? Retrieved from http://caspianenergy.net/en/investor-en/29126-the-field-is-slipping-thro… Accessed on: 01.11.2017

[1] KEPCO is a subdivision of the National Iranian Oil Company (NIOC) founded in 1998. KEPCO is an authority in exploration, development and production of oil and gas in Iran concerning the Caspian Sea and three littoral provinces of Mazandaran, Golestan and Gilan. KEPCO supervises all the contracts signed by local and international companies regarding exploration and development of hydrocarbon reserves in the area.

[2] In 1999-2000, Shell, Lasmo and Veba Oil teamed up to establish the SCSG aimed to conduct studies in the Iranian sector of the Caspian Sea. During 22 months the group conducted 10,000 kilometers of 2D seismic operations, reviewed data related to 26 wells drilled in Azerbaijan and Turkmenistan and compared the connection between the formations in the wells drilled in these two countries and Iran. In the end, the study discovered 86 geological structures in the Caspian Sea with 46 of them in better conditions. Eight of them were picked as priority structures for exploration and production studies (Shana, 2014).

[3] The survey vessel of BP, which was the exploration operator of the Alborz/Araz-Alov-Sharg block, was moved out from the contract area by the Iranian military motor boat in the summer of 2001.