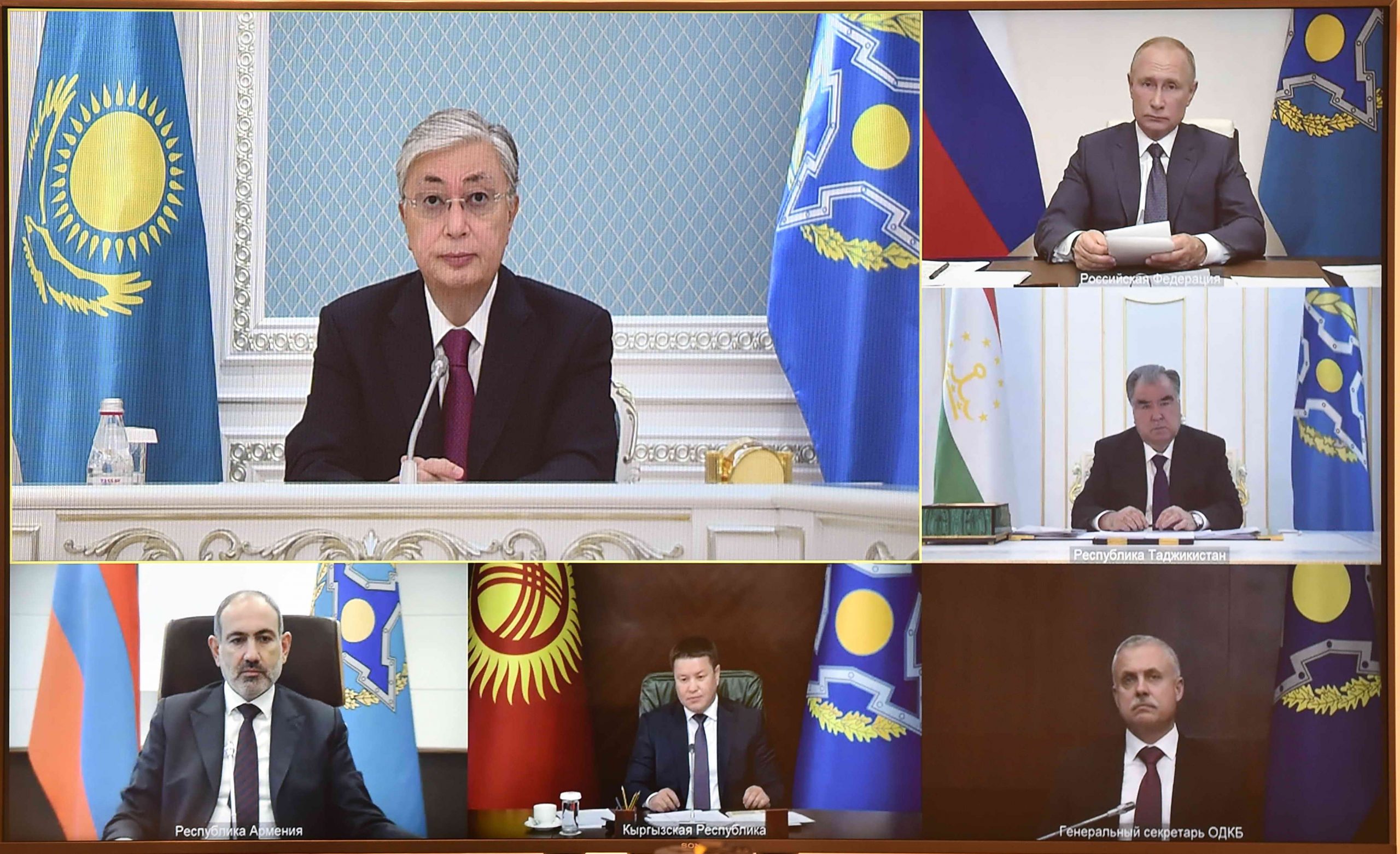 The January 2022 events in Kazakhstan boosted the popularity of the Collective Security Treaty Organization (CSTO), which for the first time in its history entered its peacekeeping mission into effect. Against the backdrop of the newfound significance, the paper scrutinizes the institutional build-up of the CSTO.

In May 1992, the Collective Security Treaty was signed between Armenia, Kazakhstan, Kyrgyzstan, Russia, Tajikistan, and Uzbekistan, which was joined a year later by Azerbaijan, Belarus and Georgia. The original five-year term of the treaty was extended in 1999 by Armenia, Belarus, Kazakhstan, Kyrgyzstan, Russia and Tajikistan when they signed a new Protocol on the extension of the Collective Security Treaty. Azerbaijan, Georgia and Uzbekistan suspended their membership. Uzbekistan joined the CSTO in 2006 and ceased again in 2012.

In 2002, signatories of the Treaty agreed to extend the functions of the agreement and advanced the status of the Treaty into the international regional organization called the Collective Security Treaty Organization. With such formation, the fragmental development of military cooperation between post-Soviet states was transformed into full-scale cooperation within the established regional security organization. At present, CSTO consists of Armenia, Belarus, Kazakhstan, Kyrgyzstan, Russia, and Tajikistan.

According to the Charter, the Collective Security Council (CSC) is the highest body of the organization that consists of the heads of member states. The Council of Foreign Ministers (CMFA), the Council of Defense Ministers (CMO), the Committee of Secretaries of Security Councils (CSSC) and the Permanent Council are bodies responsible for the coordination of interaction between member states. In addition, the Secretariat, the United Staff, and the Committee of Secretaries of Security Councils are in charge of the implementation of decisions taken during the sessions of the organization. Decisions of the CSC, CMFA, CMO and CSSC except procedural issues are taken by consensus [Kembayev, 2015; CSTO, n.d.]. In 2006, the Parliamentary Assembly was also established as an inter-parliamentary cooperation body.

The principal goal of the organization according to Article 4 of the Treaty, is in the agreement that if one of the member countries will be subject to aggression, other members will provide assistance, including military and other assistance in accordance with Article 51 of the UN Charter. In order to provide collective security, political, military cooperation and cooperation in the field of countering challenges and threats are maintained within the organization [CSTO, n.d.].

For providing political cooperation, a mechanism of regular political consultations has been established, conducted within the respective CSTO bodies. Military cooperation has been maintained under the CSTO Troops (Collective Forces), consisting of the Collective Operational Response Forces, regional (combined) groups of troops (forces), Collective aviation and peacekeeping forces, combined (joint) military systems and military infrastructure objects. Under the CSTO Troops (Collective Forces), there are three regions, namely the Eastern European, Caucasus and Central Asian regions of collective security. Since 2004, joint military drills on a regular basis have been conducted between the formations of the forces and means of the collective security system. In 2007 the CSTO peacekeeping force was created for participating in peacekeeping activities in the CSTO zone by the decision of the Collective Security Council and beyond under the mandate of the UN Security Council. In 2009, the CSTO Collective Rapid Reaction Forces (CRRF) were set, which include military contingents and formations of special forces. Apart from that, within the CSTO mechanisms for combatting international terrorism and extremism, illicit trafficking of drugs and psychotropic substances, weapons, organized transnational crime, illegal migration and other menaces have been maintaining [CSTO, n.d.].

In practice, military cooperation of the CSTO members develops mainly in two directions: through joint military activities and through preferential military trade. As mentioned above, under the CSTO mechanisms, various military training and joint advancement of military personnel have been stipulated, including preparation in specialized higher education institutions (HEI). Member states provide places in their specialized HEIs on concessionary terms or full grants for CSTO members to obtain a degree or to study as exchange students. On the other hand, according to the Special Agreement of 2000, a preferential regime for mutual deliveries of military products was established between CSTO states. Member states use preferential tariffs, which is substantial especially when purchasing military equipment from Russia. Noteworthy, besides CSTO members, Uzbekistan has the privilege of importing military supplies from Russia on preferential tariffs.

CSTO meanwhile is often called a Russia-led organization, which besides its political power, has a major share of budget and military. Russia allocates 50% of the budget, leaving 10% for each of the other members. The share of the military personnel of Russia is about 80% of the whole capacity of the CSTO army consisting of 1 million and 256 thousand soldiers [Karimov, 2021]. In addition, Russia is the second-largest military power in the world, leading with its land forces, including its tanks, artillery and land vehicles [Global Firepower, 2022].

Nevertheless, while referring as a mimic to NATO, the CSTO has been subject to considerable criticism due to its laissez-faire policy in a number of potential cases. In particular, Russia twice refused to intervene with peacekeeping forces in the conflict in Kyrgyzstan in 2010 and in 2020, both times considering the crisis as an internal affair of Kyrgyzstan. During the military conflict over Nagorno Karabakh, Russia again denied involving CSTO, stating that officially Nagorno Karabakh is recognized as the territory of Azerbaijan and hence out of the jurisdiction of the CSTO [Krivosheev, 2021].

In fact, Article 5 of the Charter indicates that the organization respects the non-interference into the affairs of the member states. However, according to the UN Charter, which has the highest authority, CSTO parties may appeal for military assistance to support the official government. At the same time, the Charter identifies such external threats as international terrorism, attempts to interfere in the internal affairs of the parties to the Treaty, the use of nuclear and other types of weapons of mass destruction, in which negotiations begin on the use of collective security forces [Zakvasin, 2017]. Whereas Article 2 of the Treaty states that in the cases of the “threat to the security, territorial integrity and sovereignty of one or more participating states, or a threat to international peace and security”, parties will start consultations on the measures of eliminating threats [Collective Security Treaty Organization, n.d.]. Consequently, the case when the CSTO has the right to intervene in the internal conflicts of the member states is indicated ambiguously in comparison to external threats.

Therefore, when the CSTO peacekeeping forces entered to protect the constitutional order of Kazakhstan, the capacity of the CSTO military forces were demonstrated for the first time in its history. For the first peacekeeping operation, mobile units and subunits of all CSTO states with 2030 CSTO peacekeepers and 250 pieces of equipment were sent to Kazakhstan [Kursiv, 2022].

With the activation of peacekeeping forces, the new chapter of the CSTO has been ushered in, which might lead to reconsidering the potential of the organization, as well as mechanisms of its functioning. By and large, time will show how the organization will be developed, especially concerning the difficult geopolitical situation in the region and of the member states. Either way, from now on, the CSTO will not be considered as an organization in a sleeping mode, while member countries, along with other stakeholders will take into account the CSTO factor in their foreign policy strategies.

Karimov, N. (2021). Effectiveness of the CSTO in the context of the changing regional security system. Retrieved from https://cabar.asia/en/effectiveness-of-the-csto-in-the-context-of-the-changing-regional-security-system. Accessed on 20.01.2022.

Kembayev, Zh. (2015). The legal framework and the process of adopting documents within the framework of the CSTO. The Collective Security Treaty Organization and post-2014 contingency planning. Ed. By Dovgan E.F., Rusakovich A.V. Geneva Center for the Democratic Control of Armed Forces, 2015.

Krivosheev, K. (2021). Does the Collective Security Treaty Organization Have a Future? Retrieved from https://carnegiemoscow.org/commentary/84923. Accessed on 20.01.2022.