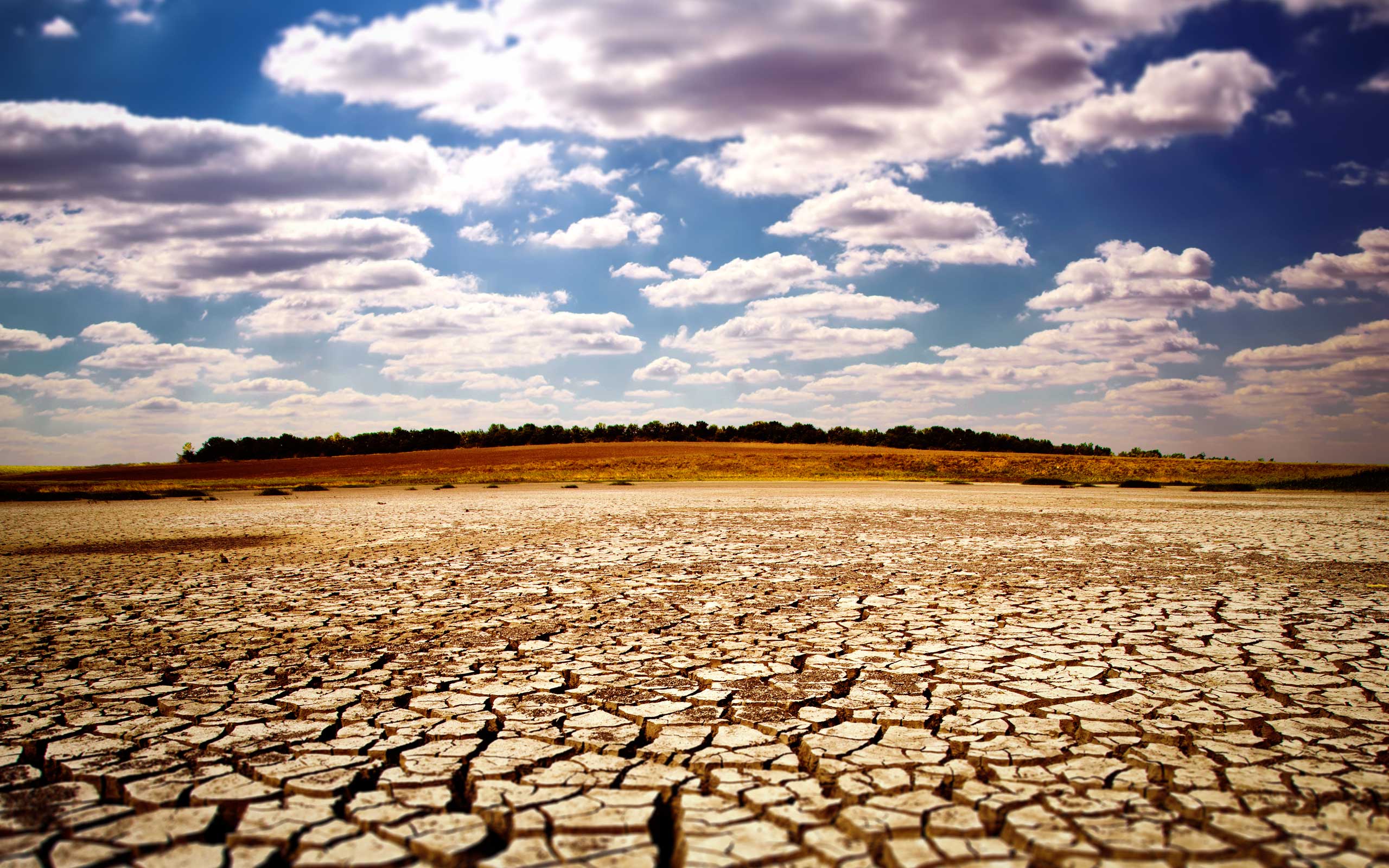 One of the global factors that determine the main vectors of global development in the 21st century will be climate change. Concerns about the adverse effect of human activity on the environment and notable shifts in the global climate started to rise by the end of the 20th century. Currently, the factor of climate change is a very significant component considered in almost all international affairs and major political decision-making processes around the world. Taking urgent action to combat climate change and its impacts is one of the 17 Sustainable Development Goals set to be reached by 2030 [UN DESA, 2021]. In general, we can observe a constant increase of climate-related investments, rising public expenditure on climate issues, tightening climate legislation and standards around the world. Total climate-related global financing for 2019 was between $608 – 622 billion, which is a 6-8% increase from 2017-18 [CPI, 2019]. Climate change concerns became the main driver of entire industries of renewable energies and other related industries.

The generally accepted concept is that climate change has accelerated over the past hundred years and that the anthropogenic factor plays a significant role in this process. The rapid course of climate change carries great risks and costs for humanity. Therefore, to slow down the course of the process, humanity must develop mechanisms to minimize anthropogenic effects on the environment to achieve long-term sustainable development primarily through decarbonizing the global economy and minimizing the emission of greenhouse gases. Kazakhstan ratified the Paris Agreement and committed itself to reduce greenhouse gas emissions by 15% until 2030 relative to amounts of 1990 [Online.zakon.kz, 2015]. To implement the decarbonization plan, Kazakhstan began developing the “Strategy for Low-Carbon Development of Kazakhstan until 2050” [vlast.kz, 2021]. Generally speaking, the government of Kazakhstan accepts climate change as an important global challenge and takes steps to reduce greenhouse gas emissions.

However, the degree of success of the implementation of plans aimed at mitigating the consequences of climate change depends not only on the government’s actions but to a large extent on general public concern and widespread view on the issue among the population. It is expected that peoples’ awareness about climate change and environmental issues is higher in developed countries that spend many resources on related issues. Interestingly, some of the research findings on polling show that climate change and environmental issues are not priority issues among highly developed European countries like Germany, France, the UK and Norway. Although there is a high level of general awareness about these issues, the vast majority of people tend to perceive them as distant threats [EPCC, 2017].

Perhaps, one of the alternative ways to evaluate the level of interest in climate change and related issues among people in Kazakhstan would be to explore the terms and topics searched in Kazakhstan using the Google Trends option provided by Google. According to the International Telecommunication Union, 76.43% of the population in Kazakhstan use the internet, which is comparable to most European countries [ITU, 2019]. Moreover, Google is by far the most popular internet search engine used by 83.69% of the internet users in Kazakhstan [Gs.statcounter.com, 2021], which makes Google Trends a rather unbiased big data tool  reflecting the interests of the vast majority of the internet users in the country. Unfortunately, Google Trends does not show the absolute number of searches of particular topics. However, it accurately shows the dynamics of the search over time along with the ranking of regions of a country by search frequency. The shape of the chart showing the interest over time can give some understanding about the popularity of a particular searched item in Google.

First of all, it turns out that the Russian language is a far more common language used for internet searches in Kazakhstan. Google search commands made in Russian are significantly more frequent than in Kazakh not only when it comes to climate change issues but also in almost all other categories.

However, even the Russian term “изменение климата” (climate change) happens to be a very rarely searched topic in Google by internet users of Kazakhstan. The frequency of this search is so low that in five regions of the country it is almost next to zero. Interestingly, in Jambyl, Almaty, and Pavlodar regions it is searched with a relatively higher frequency [Google trends, 2021]. 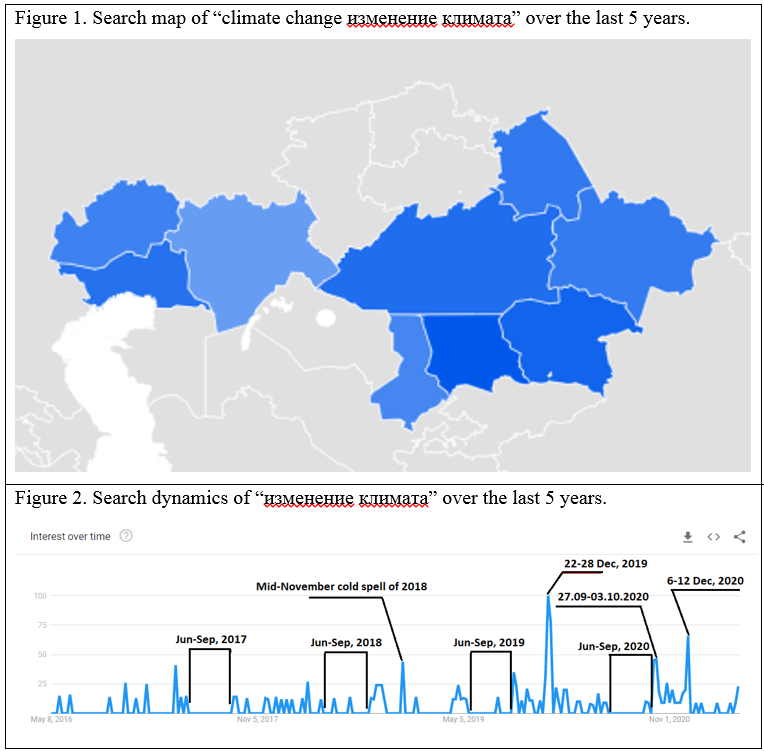 Source: Prepared by Author based on data from Google trends.

Another interesting fact is that the term “изменение климата” is a search on the internet with a certain seasonality. It is almost not searched from June to the beginning of September every year suggesting that the topic of climate change is most probably searched for academic purposes by students or professors. Another interesting fact is that internet users of Kazakhstan tend to actively search for climate change during severe and unusual cold spells that happen mostly in December. Throughout 9-17 of November 2018, the temperatures dropped well below normal level in most parts of Kazakhstan and climate change was searched far more often than usual during 11-17 of November 2018. This indicates that people in Kazakhstan tend to associate extreme weather events with climate change [Google trends, 2021].

The Kazakh term for climate change “климаттың өзгеруі” is much scarcely searched in the Google. For some reason, the Aktobe region appears to be the only region where the term has been searched fairly often over the past five years. The Kazakh term is also searched with the same seasonal pattern as the Russian one. The beginning of each academic year is when the term climate change is most actively searched by internet users in Kazakhstan [Google trends, 2021]. 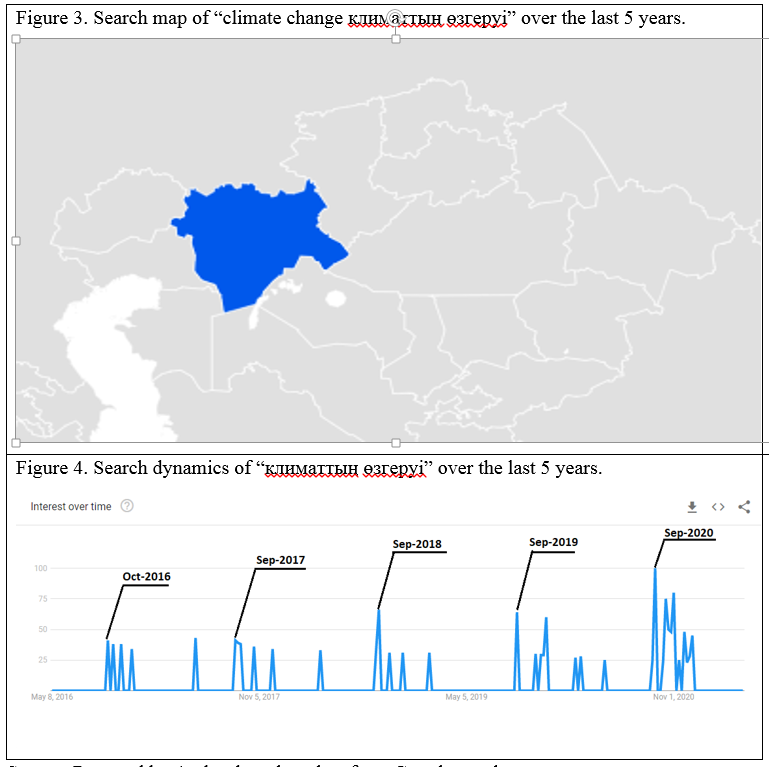 Source: Prepared by Author based on data from Google trends. 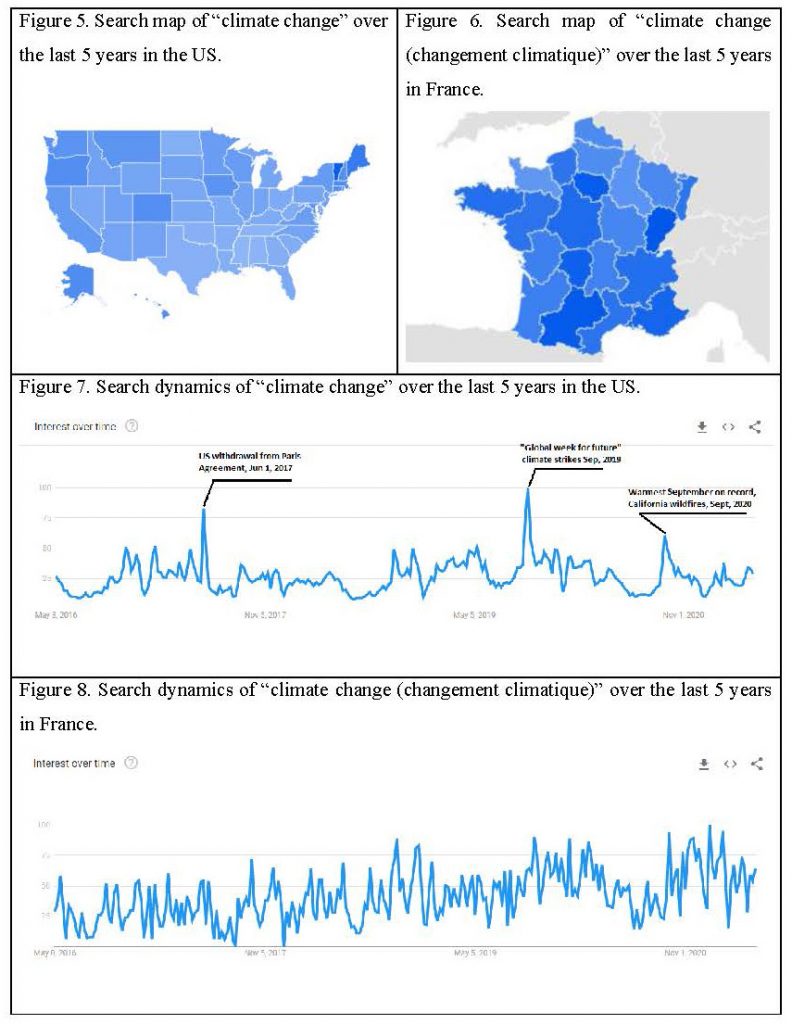 Source: Prepared by Author based on data from Google trends

The first thing that comes to peoples’ minds when they hear about climate change is “global warming” [EPCC, 2017]. In this regard, the Google trends confirm our previous thoughts showing almost zero public interest in the internet. Global warming appears to be an extremely rarely searched topic in Google among internet users in Kazakhstan (Figure 9a).

On the other hand, the Google trends show that people of Kazakhstan tend to pay attention more to other related topics like ecology and pollution (Figures 9a-d). In particular, people tend to specifically search for pollution in oceans, air, and water. Interestingly, the search frequency of pollution tends to be high in winter reaching maximum in December, while in summer it stays low. Moreover, the public interest in topics of pollution is higher in northern regions, which might indicate that one of the main reasons for people in Kazakhstan being bothered by pollution is heating in large cities in winter. As it is known, Kazakhstan still widely uses coal for heating during the winter months that are usually very cold in Kazakhstan. 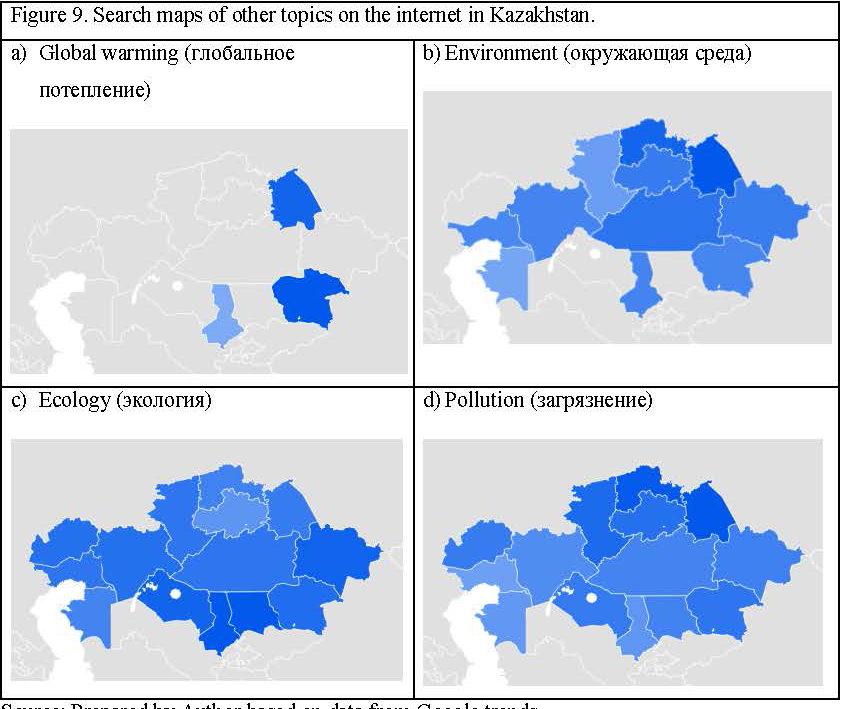 Source: Prepared by Author based on data from Google trends

The analysis of the public interest of the people of Kazakhstan in climate change and environmental issues can be used for neither confirming nor questioning the results of surveys. However, in some specific cases, the activity of people on the internet can be used as a source of alternative information and help to gain more authentic results. In this particular case, one of the advantages is that the Google trends display results based on the population itself rather than small samples, which might be not representative enough. Another important advantage of this data is its unbiasedness. While answering survey questions people might be dishonest if they feel that some type of answers are more publicly accepted even if respondents are sure that the answers will be kept anonymous. In the case of a Google search analysis, this problem is eliminated.

The analysis of the public interest in climate change and environmental issues based on the search frequency of particular keywords in Google shows that the people in Kazakhstan are not very concerned about climate change. The climate is an extremely rarely searched topic in Kazakhstan’s segment of the internet and it is most searched for academic purposes rather than the general interest of people. However, there is an increase in the level of interest in the topic of climate change among internet users of the country. In recent years, people of Kazakhstan also started to associate extreme weather events, in particular unusual cold spells, with climate change, which is in line with global trends. However, the data suggests that the term climate change is still probably more academic or scientific in public perception. Therefore, the people of Kazakhstan seem to be more focused on immediate environmental problems, the most important of which is probably air pollution. The geography of the searches and clear seasonal patterns indicate that public concerns of people about air pollution are likely to be linked to urban residential heating in winter.

The data suggests that people in Kazakhstan are generally not very curious about climate change on the internet, which might signal a low level of general awareness of the population about the issue. Obviously, climate change is not a major concern for the vast majority of people in Kazakhstan. In this regard, the issue does not receive as much attention as it should. At the same time, people in Kazakhstan seem to be more concerned about visible manifestations of climate change and environmental problems based on their own experience. This might indicate that the causal link between tangible environmental problems and fundamental causes are poorly established in the public mind, especially the people that are not involved in academic activities. Therefore, it should be a part of public policy to increase the peoples’ awareness about the climate change issues explaining the causes and consequences. The emphasis should be placed on specific threats and consequences for the region such as the water stress, desertification, the issue of the Aral Sea and others. A greater understanding of the issue is essential and requires further data collection and research.

Climate Policy Initiative (2019). An updated view on the Global Landscape of Climate Finance 2019. Retrieved from https://www.climatepolicyinitiative.org/wp-content/uploads/2020/12/Updated-View-on-the-2019-Global-Landscape-of-Climate-Finance-1.pdf. Accessed on 05.05.2021.

European Perceptions of Climate Change (2017). Topline findings of a survey conducted in four European countries in 2016. Retrieved from https://talk.eco/wp-content/uploads/European_Perceptions_of_Climate_Change.pdf. Accessed on 03.05.2021.

Kz.undp.org (2020). Outcomes of an opinion survey on climate change and environmental issues. Retrieved from https://www.kz.undp.org/content/kazakhstan/en/home/presscenter/news/2020/may/outcomes-of-an-opinion-survey-on-climate-change-and-environmenta.html. Accessed on 07.05.2021.

United Nations Department of Economic and Social Affairs (2021). Transforming our world: the 2030 Agenda for Sustainable Development. Retrieved from https://sdgs.un.org/2030agenda. Accessed on 05.05.2021.

Vlast.kz (2021). The concept of low-carbon development of Kazakhstan will be developed by mid-2021. Retrieved from https://vlast.kz/novosti/43219-koncepciu-nizkouglerodnogo-razvitia-kazahstana-razrabotaut-k-seredine-2021-goda.html. Accessed on 05.05.2021.