The Russian Navy in the Caspian Sea: a New Chapter 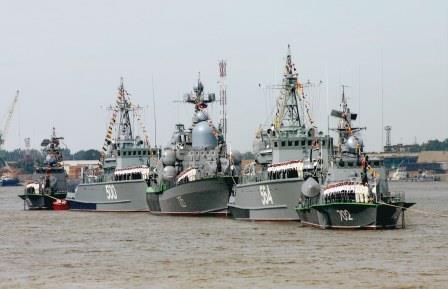 Currently, the Russian Caspian flotilla is the largest and most powerful naval unit in the Caspian Sea. Since 2002, Moscow has consistently implemented the strategy of technical re-equipment and reorganization of its naval forces. As a result, the Caspian flotilla has the largest number of warships with modern on-board weaponry. In fact, in contemporary political and economic realities, there is no rivalry between Russia and other Caspian littoral states. Moscow is supported by the coastal countries in its intention to ensure non-interference in inter-regional affairs, including security issues, by third countries. During the ongoing talks over the Caspian Sea’s legal status, the parties have repeatedly emphasized that they will avoid using military force in mutual relations. Furthermore, the agreement was reached that only littoral states should be allowed to deploy ships and military forces in the sea. Finally, the Caspian states committed themselves to not permitting any country to use their territories for a military attack against other littoral countries. Therefore, Russia’s reasons for maintaining and improving the Caspian Navy are entirely different from the alleged Moscow’s concern about potential hostile relationship and distrust with the regional countries.

Established by Peter the Great as part of the Imperial Navy, the Caspian flotilla is actually one of the oldest fleets in the Russian Navy[1]. It has been important for Russia in terms of securing its southern borders for the last 300 years. The Caspian flotilla was perceived as a key component of the Russian Empire’s expansion into the region, and it remains a vital element of continued influence and military dominance being the southernmost outpost of the country (German, 2014). As a result, the historical factor plays a significant role in understanding the current motivation of the Kremlin in strengthening its naval facilities in the Caspian Sea. For instance, on April 2, 2018, Russian Defense Minister Sergey Shoigu officially announced that the Caspian flotilla would be relocated from Astrakhan[2] to the town of Kaspiysk, Dagestan, and its personnel be increased. From Russia’s perspective, this decision should increase the effectiveness of the flotilla to protect coastal waters, fight against poaching and illegal trafficking, and guard the country’s national interests in oil-producing areas. It has already been stressed that the new base will have the country’s most technically advanced naval facilities – even more advanced than those of the Northern, Baltic, or Black Sea Fleets.

In order to implement the transfer of the naval base from Astrakhan to Kaspiysk by 2020 vast construction work should be conducted in Dagestan during the next two years, including the building of quays, logistic facilities and housing. In fact, the construction will entail improving the harbor, building new docks as well as barracks, ammunition storage facilities, and officers’ housing. Under the first stage of the project that is to be completed by 2019, it is planned to create berthing places for warships, deepen the seabed, build moorings and the necessary ground infrastructure (Navy Recognition, 2017). The idea to relocate Russia’s Caspian flotilla to the city of Kaspiysk appeared on the agenda in 2017 together with the Strategy for the Development of the Russian Seaports in the Caspian Basin initially presented in March and approved in September 2017[3]. Since Russia announced its plans to open an additional unfreezing deep port in the city of Kaspiysk, it appears that Dagestan will be given a crucial role in improving both Caspian Sea security and cargo throughput.

There are several advantages of the relocation plan. The new base for the Caspian flotilla will enjoy a strategic geographic location. The northern part of the Caspian Sea and the Volga Delta, in contrast to the middle part of the sea where Kaspiysk is placed, often freeze over during winter. Since the flotilla warships are not ice-class vessels, such severe climate conditions cause additional difficulties for conducting naval activities. Moreover, Astrakhan is about 100 km from the Caspian Sea, and ships need to pass the Volga Delta to enter the open sea (Ahmadbayli, 2018). The growing shallow of the Volga Delta makes it problematic for warships with deep draught and heavyweight weapons to maneuver and reach their maximum speed. As a result, it takes six hours to go down the river before entering the Caspian Sea. Therefore, from this point of view, the decision to relocate the Caspian flotilla headquarters with command and control capabilities from the Astrakhan port to the ice-free deep port of Kaspiysk in Dagestan is strategically correct (Sputnik, 2018).

Finally, since the Caspian flotilla is primarily tasked with providing security in the Caspian Sea region, including support for counter-terrorism measures in the North Caucasus, especially in Dagestan (Kokcharov, 2018), it is of critical importance to Russia to have an additional stabilizing factor, such as the new naval base. Despite the fact that combating organized crime and fighting corruption and embezzlement of budget allocations do not fall within the Caspian flotilla’s field of competence, the mere presence of the strengthened naval forces in Dagestan could reduce illegal traffic and criminal activity.

In conclusion, the Caspian flotilla’s rebasing, if realized, would be the first naval headquarters’ relocation in Russia since the 1990s. There is no doubt that the construction of the new naval base capable of berthing all the flotilla missile ships equipped with high-precision weapons would become an important element of the Russian military-political strategy in both the Caspian region and the Middle East. However, the creation of a fully-fledged and weather-protected port infrastructure in Kaspiysk is a rather costly project. Moreover, the Kaspiysk port project envisages the construction of not only military naval facilities, but also the creation of an infrastructure necessary for commercial shipping activities. Therefore, the implementation of the new naval base project will largely depend on how effectively and timely the funds allocated by the Russian government will be expended. Nevertheless, it is quite obvious that the naval base relocation will further enhance Russia’s military dominance in the region, encouraging Moscow to continue implementing the long-term strategy of sheltering the Caucasus and Central Asia under the umbrella of land, naval, and air defense networks and bases.

Navy Recognition. (2017). Russia builds Naval Base in Kaspiisk for its Caspian Flotilla. Retrieved from https://navyrecognition.com/index.php/news/defence-news/2017/october-2017-navy-naval-forces-defense-industry-technology-maritime-security-global-news/5623-russia-builds-naval-base-in-kaspiisk-for-its-caspian-flotilla.html. Accecced on 15.04.2018.

[1] The Caspian Flotilla was established in November 1722.

[2] Currently, the Caspian flotilla is headquartered in Astrakhan with the secondary base in Makhachkala.

[3] The main phase (2020-2025) of the new strategy includes the construction of new deep-water seaport facilities in Kaspiysk, the development of new investment projects on the territories with a special regime, as well as the development of trans-Caspian Sea cruise tourism and international trade, mostly with Iran.