The Turkic Side of Ukraine’s Political Identity: The Role of Crimean Conflict in Ukraine’s Nation-Building 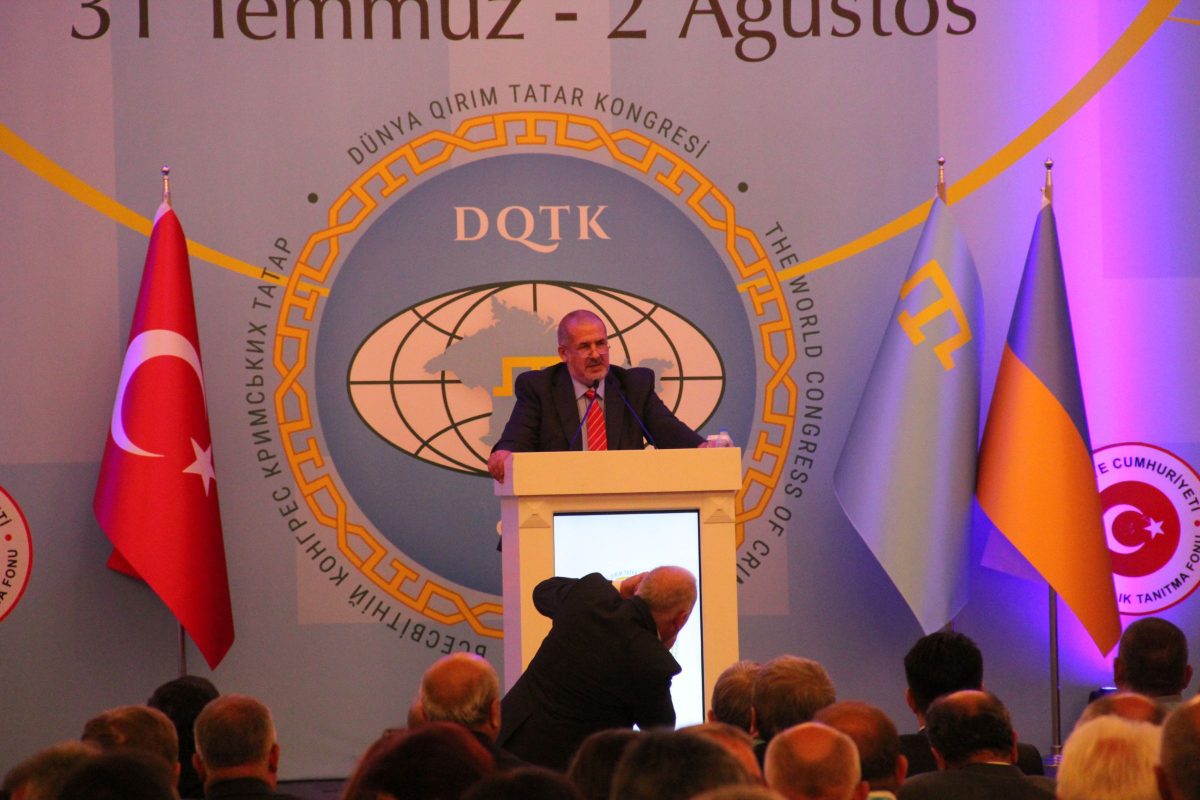 Since the outbreak of the Russo-Ukrainian war in February 2014, the two countries have lived in a constant confrontation mode. It can be said that the active phase of the conflict was a continuation of the previous long-lasting controversies regarding the underlying principles of the development models of the two neighboring states that had been becoming more and more evident. The active phase of the conflict since 2014 certainly caused some technical difficulties and challenges for the accomplishment of Ukraine’s European aspirations. Ukraine’s long lasting withstand against Russia and attempts to seek grounds for partnerships with the EU showed its unswerving position to prioritize its pro-western choice over contacts with its eastern neighbor. However, it also led it to reconsider its self-identification and the way it presents itself before European and the global community.

The conflict over Crimea as well as eastern regions of Ukraine put forward the issues of identity. Besides political preferences, the conflict occurred along ethnic and linguistic cleavages, which was a rather sensitive and unresolved issue for Ukraine. Within this context, the case of Crimean Tatars received much attention from the EU and global community in general. Several documents have been issued following the establishment of Russian control over the Crimean peninsula in 2014 (Muižnieks, 2014) and afterwards (Council of Europe, 2016; European Parliament, 2016) raising concerns over the human rights of Crimean Tatars and the legality of the presence of Russian authorities on the territory of Crimea. This growing awareness of the situation provided Ukraine an opportunity, which it used embarking on comprehensive actions of addressing its claims to restore its own territorial integrity along with its aspirations of European integration. At the same time, the factor of minorities in the Russo-Ukrainian conflict influenced Ukraine’s perception of its national identity in the light of its ethnic diversity.

The factor of Crimean Tatars has become an important component of the nation-building process of Ukraine over the last few years. Since the beginning of the Russo-Ukrainian conflict we can see that Ukraine has taken steps to making the Crimean Tatar identity an important component of a broader understanding of Ukraine’s national identity in its foreign affairs. For instance, in January 2021, the Ministry of Ukraine for Reintegration of the Temporarily Occupied Territories of Ukraine announced about creating a Concept for Development of Crimean Tatar language until 2032. The Ministry has sent a request to Google and Duolingo to integrate the Crimean Tatar language into their technological platforms [Unian.info, 27.01.2021]. It is important to note that Ukraine’s support for Crimean Tatars and attempts not only to preserve but also to bring it into an international context implies additional channels of interaction for Ukraine with Turkic states. The Minister for Reintegration of the Temporarily Occupied Territories of Ukraine Aleksey Reznikov also noted that the knowledge of Crimean Tatar language would open up a new quality of relations for Ukraine with Turkic states such as Turkey, Azerbaijan and Central Asian states with a combined population of about 170 million people [Ukrinform.net, 2021]. In August 2020, in an interview with the Demirören Turkish news agency the First Deputy Minister of Foreign Affairs of Ukraine Emine Dzheppar said that Ukraine wanted to obtain an observer status in the Turkic Council [Ukrinform.net, 2020a]. A month after that the Ambassador of Ukraine to Ankara Andrii Sybiha met with the Secretary General of the Turkic Council Baghdad Amreyev, during which the Ukrainian Ambassador expressed Ukraine’s intentions to establish closer cooperation and deeper integration with the Turkic Council members [Turkkon.org, 2020].

It should be admitted that Ukraine has strong reasons to develop and establish closer ties with Turkic states. The Russo-Ukrainian conflict had a visible negative effect on Ukraine’s cooperation with Central Asian states although they were not involved in it. Ukraine started the process of abandoning the Commonwealth of Independet States (CIS) almost immediately after the outbreak of the conflict with Russia, which suspended many agreements of cooperation between Ukraine and Central Asian states in various fields [Lenta.ru,  2014]. The conflict increased the cost of trade between Central Asia and Ukraine and the trade plummeted. For instance, in the bilateral trade between Ukraine and Kazakhstan in 2013 were at $4.3 billion and by 2015 it more than halved dropping to $2.0 billion. In 2019, the bilateral trade between Ukraine and Kazakhstan was only $1.3 billion [UN Comtrade, 2021]. In 2015, Russia and Ukraine banned each other from flying in airspaces, which increased the costs of Ukraine International Airlines (UAI) and 2019 it had to cease operations in Kazakhstan. Moreover, Ukraine had GDP downturns of -6.5% and -9.8% in 2014 and 2015 respectively, which led to corresponding effects on its trade and economic connections with all countries. Thus, the Russian-Ukrainian conflict has led to a certain gap in cooperation between Ukraine and the Central Asian states, and there is a certain demand for their restoration..

It is worth mentioning that Turkey is a key partner of Ukraine outside the European Union (EU) in many areas and it plays a key role in helping Ukraine in promoting and internationalizing the Turkic identity of Crimean Tatars. Currently, Turkey is the second largest trade partner of Ukraine outside the EU after Russia. The bilateral trade between Ukraine and Turkey amounted to $4.9 billion in 2019 [Comtrade, 2021] and the two countries have ambitious plans to increase the bilateral trade to $10 billion [Aa.com.tr, 2020]. Turkey is the country that received the most number of Crimean Tatars (nearly 20 thousand) that abandoned Crimea after Russia established its control over the peninsula [Rusi.org, 2020]. In August 2015, Ankara hosted the Second Congress of Crimean Tatars on which Crimean Tatars were declared as the main and indigenous people of the Crimean peninsula [Svoboda.org, 2015]. Obviously, besides Ukraine Turkey is the country that contributes the most to raising the issue of Crimean Tatars ensuring international exposure for the issue through comprehensive support.

Since recently, Ukraine has started its application for observer status in the Organization of Islamic Cooperation (OIC), which has been done in the context of the situation around Crimea since 2014. During a video conference meeting with OIC General Yousef Al-Othaimeen held in November of 2020, the First Deputy Minister of Foreign Affairs of Ukraine Emine Dzheppar announced of reinitiating the process of Ukraine’s application for observer status in the organization [Ukrinform.net, 2020b]. The idea came up for the first time yet in April 2014 when during a meeting with the Leader of Crimean Tatar people Mustafa Jemilev the Secretary General of the OIC Iyad bin Amin Madani pointed out the possibility and necessity for Ukraine to join the organization [Islam.in.ua, 2020]. The keenness of Ukraine in supporting such initiatives of Crimean Tatars, including through means that emphasize its plurality of national identity, can be understood as attempts to defend its territorial integrity and seeking international support in its conflict with Russia. At the same time, these actions present a positive image of Ukraine to the EU and the entire global community as a multiethnic state, which protects the rights and freedoms of its ethnic and religious minorities.

Over the course of the Russo-Ukrainian conflict over Crimea that lasts since 2014 Ukraine has managed to mobilize different types of diplomatic resources to defend its territorial integrity. Its extensive efforts to attract the attention of the EU and global community voicing the issue of Crimean Tatars presented it as a modern democratic multiethnic state. By putting forward the agenda of Crimean Tatars, Ukraine also demonstrates that Turkic and Islamic identities are also inseparable parts of the Ukrainian national identity. This recent trend in the Ukrainian diplomacy sets the stage for new cooperation prospects to Ukraine with the Turkic and Islamic worlds.

Council of Europe (2016). The situation of national minorities in Crimea following its annexation by Russia. Directorate-General for External Policies Policy Department. April 2016 -PE 578.003.

Islam.in.ua (2020). The Organization of Islamic Cooperation supports territorial integrity of Ukraine. Retrieved from https://islam.in.ua/en/world-news/organisation-islamic-cooperation-supports-territorial-integrity-ukraine-0. Accessed on 07.02.2021.

Rusi.org (2020). Turkey Forges a New Geo-Strategic Axis from Azerbaijan to Ukraine. Retrieved from https://rusi.org/commentary/turkey-forges-new-geo-strategic-axis-azerbaijan-ukraine. Accessed on 05.02.2021.

Turkkon.org (2020). The Secretary General of the Turkic Council received the Ambassador of Ukraine to Ankara. Retrieved from https://www.turkkon.org/en/haberler/secretary-general-of-the-turkic-council-received-the-ambassador-of-ukraine-to-ankara_2066. Accessed on 05.02.2021.

Ukrinform.net (2021). Concept of Crimean Tatar language development to be presented within a week. Retrieved from https://www.ukrinform.net/rubric-society/3174558-concept-of-crimean-tatar-language-development-to-be-presented-within-a-week.html. Accessed on 20.01.2021.

Ukrinform.net (2020a). Ukraine seeks to obtain observer status in Turkic Council. Retrieved from https://www.ukrinform.net/rubric-polytics/3077509-ukraine-seeks-to-obtain-observer-status-in-turkic-council.html. Accessed on 05.02.2021.

Ukrinform.net (2020b). Foreign Ministry renewed Ukraine’s application for observer status in the Organization of Islamic Cooperation. Retrieved from https://www.ukrinform.net/rubric-polytics/3128323-foreign-ministry-renews-ukraines-application-for-observer-status-in-organization-of-islamic-cooperation.html. Accessed on 06.02.2021.